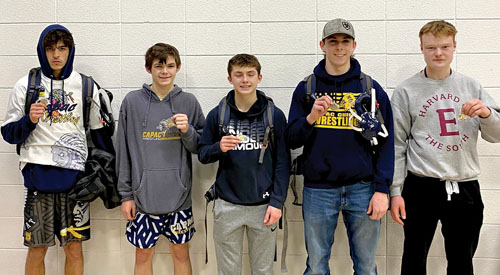 CAPAC — The Capac wrestling team will send five grapplers on to this Saturday’s Division 4 individual regional in Ithaca.

They earned the right to compete there with top-four weight class showings last Saturday at a New Lothrop-based regional.

Derek Mason led Capac with a second that day. Mason reached the 145-pound title match where he fell 7-0 to New Lothrop’s Jack Kulhanek.

Tyler McKenney and John Schoen provided Capac with thirds. McKenney concluded his stint at 112 pounds when he pinned Brown City’s Kevin Spudowski with 2:02 gone and Schoen wrapped up 152-pound action with a 12-10 win against New Lothrop’s Dominic Casciano.

Jeff Helzer and Hunter Tyson added fourths to Capac’s cause. Helzer completed his stint at 119 pounds when he was pinned with 4:33 gone by St. Charles foe Matias Escamilla IV and Tyson finished 160-pound action when he was defeated 8-6 by New Lothrop’s Colton Symons.