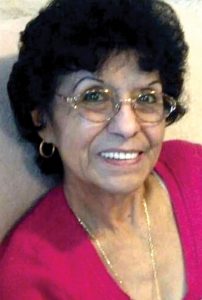 Amelia Coronado, age 76, of Imlay City, MI passed away Monday, February 7, 2022 at McLaren Lapeer Region Hospital. Amelia Gloria Martinez was born March 10, 1945 in Detroit, MI. She was the daughter of the late Bartols Martinez and the late Hortencia Rendon. She married Rosendo Coronado on May 20, 1986 in Port Huron, MI. Amelia grew up in Capac and attended Capac High School. She lived most of her life in the Capac and Imlay City area. Her grandparents, Pedro and Reyes Rendon, raised her.

Amelia worked as a seamstress, making seat covers at the Ford Motor Company’s Chesterfield Plant. She retired after 19-plus years.

Amelia was very committed to her church and was a long time greeter at Sacred Heart Catholic Church in Imlay City. She enjoyed spending time with her grandchildren, sewing, working on puzzles, playing cards, and games like Sudoku.

Please be sure to sign the online register book at muirbrothersfh.com to share your memories and condolences with the Coronado family.