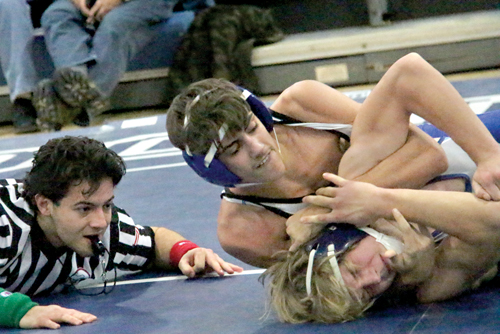 Imlay City’s Conner Wildie looks to finish off his 135-pound match Saturday at the BWAC Tournament in Yale.

Julian Rojas and Anthony D’Ambrosio provided Imlay City with seconds. The former ended 130-pound action when he was pinned with 1:38 gone by Yale’s Seth Woolman and the latter wrapped up his stint at 145 pounds when he was pinned by Yale’s Cole McLaughlin with 4:22 gone.

Tanner Land and Conner Wildie contributed thirds to Imlay City’s cause. Land concluded 103-pound action with a 6-5 win against Algonac’s Sky Langewicz and Wildie finished his stint at 135 pounds when he pinned Armada’s Leo Andrews with 3:48 gone.

Imlay City also received a fourth from Aaron Evely. He completed 152-pound action when he was pinned with 1:59 elapsed by Armada’s Kyle Coenen.

Dallas Stanton paced Almont with a fourth that day. Stanton wrapped up his stint at 112 pounds with a 1-0 loss to Algonac’s Lucky Gartin.