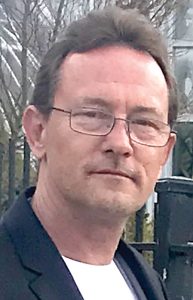 Thomas “Tom” Clarence Hinkley, of Dryden, passed away peacefully in his wife’s arms on Wednesday, February 2, 2022, at the age of 56, at their home. He was born July 19, 1965, in Chicago, IL. Tom worked at Barron Industries of Oxford for more than 17 years. He met the love of his life, Jeanne Tuzik, at Barron. Tom and Jeanne lived together for years and were married on October 19, 2021. They were surrounded by a few close friends and God’s Holy Spirit on their property on that special day.

Tom was a mechanical genius with a quick wit and great sense of humor. His gentle sparkle and kind heart left an indelible mark on all he knew. He built his own house in Dryden, MI, with the help of his father, Terry. He carved trails throughout his forested property where he left spots with beautiful views that were ideal for bonfires to be enjoyed with family and friends. He was a deer hunter and would watch them run those same trails. Tom would ride his snowmobiles and quads on those trails and would, often, play hide and seek on the quads with Jeanne. He was also a fisherman and spent many days fishing with his father. In all, Tom loved the outdoors and loved his dogs and cats. He was a great cook and enjoyed barbequing. He was the best griller and had dreams of owning a food truck one day.

Tom was a friend to everyone he met. He was always happy to help others, often helping a coworker with a car problem before heading home or stopping at a friend’s shop in Metamora for a quick repair. Jeanne, his wife and soulmate, called him her sweet miracle. Tom was easy to love because he loved so easily. He touched many people across the moments of his life and will be both celebrated and missed by every one of them.

Tom leaves his soulmate and wife, Jeanne Tuzik of Dryden; two children, Megan Tuzik of Dryden and Michael (Lindsey) Tuzik of Lake Orion; and four grandchildren, Connor, Cameron, Clair and Cooper. Tom is also survived by his mother, Michaeline Hardman of Clarkston; his two sisters, Denise Mansky (Rick, his “brother from another mother”) and Michelle Heacock; his nieces, Misty Combs (Michale), Lori Mansky, and Delanie and Cassidy Heacock; and nephews Michael Hinkley (Emma) and Matthew Hinkley; all of whom he loved dearly.

He was preceded in death by his father, Terry Hardman, who was also his very best friend.

The family will be receiving friends and family on Saturday, February 12, 2022, from 1-5 p.m. with the Celebration of Life Service at 5 p.m. and the Memorial Dinner to follow – all to be held at Muir Funeral Home & Celebration of Life Center, 2650 South Van Dyke, Imlay City, MI 48444.

Memorial donations may be made in Tom’s honor to the American Lung Association. Please share a story or photos on Tom’s Memory Page at www.muirfh.com