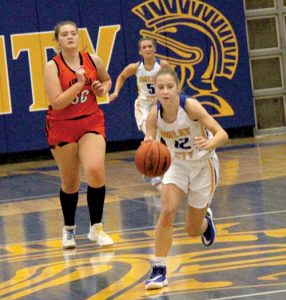 Imlay City’s Dakota Deel brings the ball up the floor during a game with Armada.

In Tuesday’s clash, Imlay City bolted out to a 15-9 advantage after one quarter was done and widened the gap to 37-14 at the half.

Imlay City then outscored Armada 20-9 from that point on, good for a 57-23 win when the final buzzer sounded.