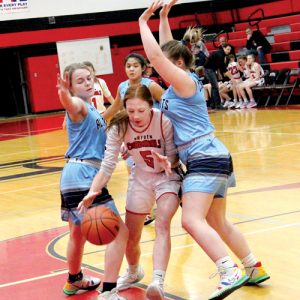 In Friday’s game, Dryden grabbed a 7-3 edge after one quarter was history.

The next eight minutes of hoops saw Bay City All Saints net five points and Dryden manage three, closing the gap to 10-8 at the half.

When the action resumed, Dryden hit for 10 third quarter points as did Bay City All Saints. That left them holding a 20-18 edge with 24 minutes gone.

Bay City All Saints then outscored Dryden 10-2 from that point on, pulling out a 28-22 victory.

Jessica Peters paced Dryden with eight points. She was backed by Rilynn Lindsay (four points), Lauren Abromaitis and Keira Miller (a trifecta each) along with Ashley Hickmott and Delaney Wolle (two apiece).