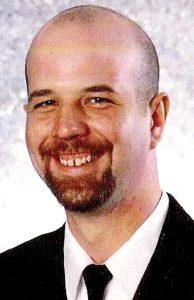 Dan Case, age 44, of Colorado Springs, CO, formerly of Imlay City, MI died Thursday, January 27, 2022 in the beautiful mountains of Colorado. Daniel D. Case was born June 23, 1977 in Fort Benning, GA. He was the son of Jerry Case and Bernadine “Bernie” (Zimmer) Case. Dan grew up in Imlay City. He attended Imlay City High School. Dan had studied to become a Brew Master. He married Tara Foley on August 17, 2013 in Angola, IN.

Dan worked as a Brewer for breweries in Frankenmuth, Chapman’s Brewing Co. in Angola IN (2-3 years), and Insight Brewing Co. in Minnesota (2-3 years) before moving to Colorado Springs, CO to work at the Rock Bottom Restaurant and Brewery. He had been working there for the last six years.

Dan is survived by his wife, Tara Foley of Colorado Springs, CO; his father, Jerry Case of Lapeer; his mother, Bernadine “Bernie” (Jack) Hager of Imlay City; a brother, Greg Case of Indianapolis, IN; and his grandmother, Virginia Zimmer of Marlette, MI. Also surviving are several nieces, nephews, cousins and lots of friends.

Dan has been preceded in death by his grandparents, Robert Case, Jean Case Dewey and Clarence Zimmer.

The family will be available to visit with friends and relatives during that time.

The Case family has entrusted Muir Brothers Funeral Home of Imlay City, 225 N. Main Street, Imlay City to assist with the planning of the Celebration of Life.

Please be sure to sign the online register book at muirbrothersfh.com to share your memories and condolences with the Case family.

If you are planning to attend the Celebration of Life please let us know on our webpage register book.