It is expected to be some time however, before the $20 million substation is up and running.

The substation’s purpose is to provide much-needed electrical capacity to accommodate the community’s increasing electrical needs and anticipated population growth. For some time, Almont township and village officials have been asking the company to address demand and the frequency of storm-associated power outages. 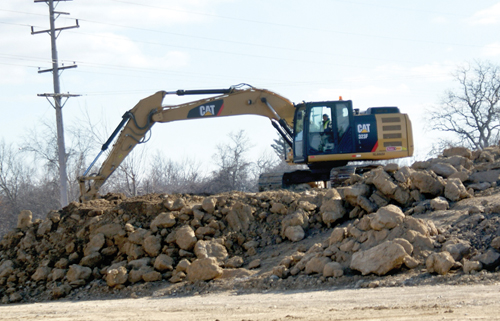 Contractors from Motor City Electric were busy last week installing underground lines at the future site of the substation.

In recent weeks, contractors from Motor City Electric were installing undergound lines at the site; a process that should be finished by the end of the month, weather permitting.

Last week, DTE spokesperson Chris Lamphear reported that the project continues to move forward; though a completion date is unknown.

Lamphear said a ‘control house’ will be brought to the site later this month.

Despite progress being made, he could not predict when the facility will become fully operational.

Almont Township Supervisor Paul Bowman said on Monday that he plans to meet soon with DTE officials to further assess the substation’s progress.

Bowman noted earlier that some zoning issues pertaining to the site had yet to be mutually resolved.

The Almont area has experienced power issues for the last several years.

In July 2019, an electrical malfunction occurred at the DTE substation at the northwest corner of Almont and Kidder roads. Residents in the village and surrounding townships were without power for several days. At one point, DTE placed large generators at four locations in Almont and its periphery while repairs were made.

In 2020, Almont’s Orchard Primary and Middle School were both damaged and forced to temporarily cancel classes following a power surge. The surge was caused when a tree fell on power lines during a wind storm, DTE officials told the district. The company said they would compensate some of the $125,000 the school incurred in that incident.