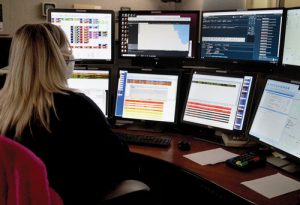 Millage dollars will be used to create two additional dispatch stations that can be utilized during times of high call volume weather events.

Last month, Lapeer County Commissioners approved 911’s dispatch stations project that will use $100,000 in 911 millage dollars for the new equipment.

“The weather and other serious events have been increasing in severity over the years and we often find ourselves overwhelmed with phone calls which reduces our efficiency in handling emergencies,” said Lapeer County Central Dispatch Executive Director Jeffrey Satkowski.

“We have a text-alert system for employees where when activated, anyone close by and available to come in on a moment’s notice will do so. Every time, we end up with more people showing up than we have stations for them to work from. So these two additional stations will help spread the load out and help us serve the public and the first responders better, while also reducing the enormous stress we undergo during storm mode situations.”

The project will include adding two consoles or desks, computers for the 9-1-1 phone systems, GPS mapping for 9-1-1 callers, a general purpose computer and the county’s CAD (computer aided dispatch) system.

“These two stations will be identical to the existing five minus radio capability. We’re doing well with the five radio positions and don’t require more at this time,” Satkowski added.

He hopes the new stations are operational come springtime when the changing season typically brings high winds, ice storms and other severe weather.