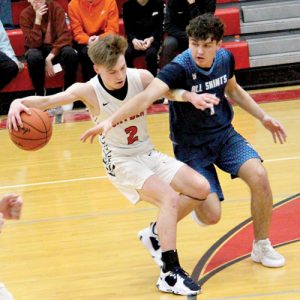 Dryden’s Merrick Maris protects the basketball from a Bay City All Saints foe during last Friday’s non-league encounter at home.

In Friday’s contest, Dryden went up 18-16 after one quarter was over with.

Dryden then outscored Bay City All Saints 18-6 from that point on, good for a 61-37 triumph when the final buzzer sounded.