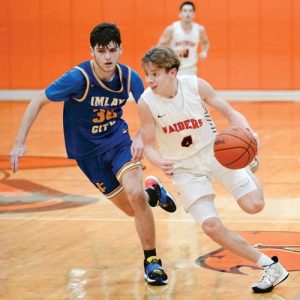 In Friday’s contest, Almont took a 9-8 edge after one quarter was complete and led 18-17 at the half.

When play resumed, Imlay City struck with a 14-10 third quarter edge. That staked them to a 31-28 cushion with 24 minutes gone.

Blake Campbell (11 points) paced Almont. He was backed by Rich Rockey (nine points, including a trifecta), Logan Walton and Clayton Roszczewski (seven, featuring a trey, each) plus Marko Radisavljevic and Haden LaCavera (two each).