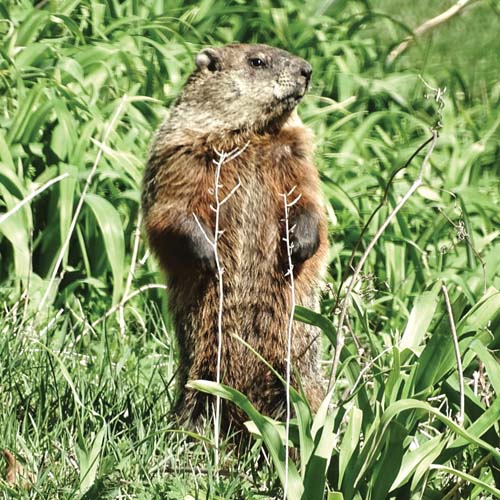 ‘Stubby,’ a hero of the Sams’ new book about groundhogs. (Sue Sam Photo)

GOODLAND TWP. — Sure, Punxsutawney Phil might be a household name, but this Groundhog Day the spotlight is shining on another Most Unusual Groundhog Story.

That’s the name of a new book— ‘A Most Unusual Groundhog Story’—written by backyard biologists and wildlife enthusiasts Susan ‘Sue’ and Joseph ‘Joe’ Sam.

The tale is the second nonfiction account of their findings at ‘Woodchuck Wonderland,’ also known as the Sams’ backyard acreage around their country home.

For two decades, the couple has observed and documented the daily activities and nocturnal goings-on of woodchucks—an oft-misunderstood and harshly judged animal in their estimation.

“We hope that people will see the animal beyond Groundhog Day,” Sue says. “This is such a phenomenal story that it had to be told.”

Through keen observation and artistic eyes, the Sams’ careful and creative documentation of the marmots in their yard netted some surprising results. Turns out, the stout-bodied animals are very familial—in some cases both females and males taking part in the raising of young. This, says Sue, is an eye-opener.

“The male groundhogs have gotten a bad rap when it comes to the females,” Sam says. “It has been thought to be very uncommon to see the males stick around after mating season, especially when the females have their babies. But we’ve seen otherwise. What we witnessed was just phenomenal.”

Through the use of trail cams and their own photography skills, Sue and Joe’s latest tale centers around the courtship of ‘Ash,’ a female woodchuck sought after by many suitors.

With extraordinary photos and imaginative narration, ‘A Most Unusual Groundhog Story’ takes readers young and old through two groundhog seasons—from spring emergence to autumn hibernation. When spring rolls around and the groundhogs surface from their dens, it becomes clear that ‘Stubby,’ a male named for his short tale—emerged as the winner of Ash’s heart.

Readers see his efforts in creating and policing the burrows and keeping their underground domain tidy and clean. While this is not most unusual in the mating of groundhogs, what happened next, Sue says, is.

After the kits—sometimes called pups or chucklings—were born, Stubby suffers a severe injury to his spine, which ultimately leads to his death. Despite his injuries, he drags his nearly limp body to the burrows one last time to mark his territory.

After his death, another male comes around to help Ash raise the kits. This is most unusual, Sam says, as it was well past mating season. The dedicated marmot steps in to patrol and maintain the network of burrows around the Sams’ yard. Milo also helps care for and raise the young.

“For him to come in after mating season and see him interacting with the babies and taking over raising them was just a remarkable thing to watch,” Sue says. “It’s just an incredible story of what male woodchucks do—when it’s so widely thought that they don’t. I can’t help but think that there’s something special on our property.”

Indeed, since 2003 Sue and Joe have been delving into all things woodchuck, and also capturing magical moments of other woodland creatures that make their way through their yard.

‘A Most Unusual Groundhog Story’ features stunning photos of deer and fawns, wild turkeys, rabbits and raccoons and colorful birds captured behind the camera lens.

And while everyone’s eyes are on ol’ Punxsutawney Phil today, Sue says they’ll be looking for any and all signs of life from the burrows that dot their grounds.

“It’s very exciting to have hibernating groundhogs and I’m pretty sure we have one hibernating this year,” she says. “We’ll see what happens.”

Throughout the years, the Sams’ efforts at documenting the behavior of groundhogs has led to connections with research projects in the U.S. and Canada. Their information has been shared by UCLA professor and marmot researcher Dan Blumstein, and they’ve worked with licensed wildlife rehabilitators and other researchers in the field.

Their first publication—The Amazing Groundhogs of Woodchuck Wonderland—was published in 2018.

A portion of the first month’s sales of ‘A Most Unusual Groundhog Story’ will be donated to the Marmot Recovery Foundation, a Canadian organization that lists the VanCouver Marmot as an endangered species.

For more information about the Sams’ research, visit www.woodchuckwonderland.com.