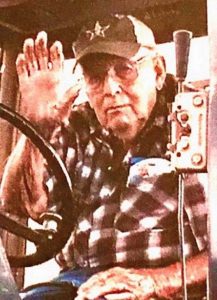 John “Jack” Patterson, age 92, of Almont, MI died Wednesday, January 26, 2022 at his home surrounded by his loving family. John Gerald Patterson was born May 23, 1929 in Mount Clemens, MI. He was the son of the late Lee and the late Mabel (Vories) Patterson. He grew up in Smiths Creek, MI. Jack attended country school. He has lived most of his adult life in the Almont, MI area. He married Laura Zsolczai on May 23, 1964 in Imlay City, Michigan. Jack was preceded in death by Laura in 2017.

He was a self-employed milk hauler and cash crop farmer. Jack was a member of the Michigan Milk Producers Association. He was a dairy farmer in the 1960s.

Jack was a wealth of knowledge of the Imlay City, MI Big Boy Restaurant. He had a love of agriculture and enjoyed watching everyone’s fields around the area.

Jack was preceded in death by his wife, Laura Patterson; his daughter, Jill Marie; and his brothers, James “Jim” Patterson and William “Bill” Patterson.

Those wishing to make memorial contributions may direct them to United Hospice of Marlette, 2770 Main Street, Marlette, MI 48453.

Please be sure to sign the online register to share condolences and memories with the Patterson family.