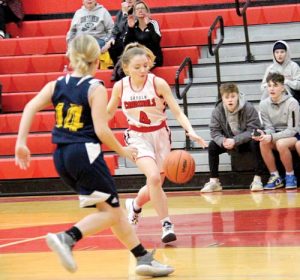 In Thursday’s clash, Carsonville-Sanilac grabbed a 7-4 edge after one quarter was done.

They then followed it up with a 11-4 second quarter advantage, increasing their cushion to 18-8 at the half.

When the action resumed, Dryden struck with a 15-8 third quarter edge. That trimmed their deficit to 26-23 with 24 minutes elapsed.

The final quarter saw both sides hit for 11 points, leaving Carsonville-Port Sanilac with a 37-34 win at night’s end.