The community forum was scheduled shortly after the recent shooting deaths of four students at nearby Oxford High School.

Having retired from the Michigan State Police (MSP) after 27 years of service, Mynsberge is a 20-year veteran of the MSP’s Emergency Support Team (SWAT).

Drawing from his life’s experiences, Mynsberge is a respected trainer in the field of command and incident control, including school shootings.

Dr. Kalmar said about 20 people were present at the forum, while another 80 people joined the conversation online.

Kalmar said the public forum resulted in a valuable exchange of information and ideas, followed by a question and answer segment.

“The audience was limited, but I felt there was some good discussion and our parents asked some very good questions,” Kalmar said. 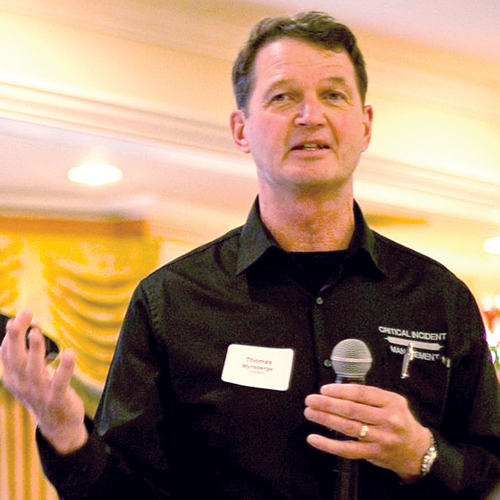 Tom Mynsberge of Critical Incident Management was among the presenters at Almont’s School Safety Forum on Jan. 19.

He alluded to some of the audience’s more frequently-asked questions about the district’s ongoing and continuing efforts to ensure the safety and welfare of all of its students, teachers and staff.

One audience member asked if Almont schools were sufficiently equipped with night locks and door barricades.

Kalmar responded that current lockdown procedures at Almont Community Schools require that all doors be locked throughout the school day.

Kalmar said each of the district’s three school buildings have secured entranceways, and that the district is considering installing barricades at all classroom doors.

He responded to another parent who asked if the district had looked at hiring armed security.

Kalmar noted that full time Almont Police Liaison Officer Amanda Manning is on campus throughout the school day in the event of an emergency or serious incident.

“We can also solicit additional support at any time from the Almont Police Department,” said Kalmar.

Another parent asked if the school district has plans to install metal detectors or require students to carry clear backpacks, as some local schools and others across the state already have.

Kalmar responded that those particular safety precautions have yet to be implemented.

Kalmar noted that all Almont schools have installed ‘state of the art’ interior and exterior security cameras, which can be accessed and monitored by Almont police and other law enforcement.

In response to a question about whether the district conducts random searches of student lockers, backpacks and cars for weapons, Kalmar said Michigan schools must operate within certain legal constraints.

“We cannot randomly search students,” he said. “Searches can only be conducted if there is a good cause or reasonable suspicion.”

Also discussed were the wide-spread incidences of ‘false threats’ being made at local schools in the aftermath of the Oxford shootings.

Lapeer County Prosecutor John Miller recently visited Almont High School to talk with students about the consequences of making threats; whether online, in texts, social media, in writing or verbally.

Miller warned students that any and all threats are being taken “very seriously” by law enforcement, and that the legal consequences of doing so could be severe.

Kalmar stated that when a threat is reported at Almont Schools, the district’s “threat assessment team” immediately responds to determine if the threat is false or credible.

“The members of the team include law enforcement, our administration and counselors,” said Kalmar. “Signs of credibility may include specific comments, evidence of advanced planning, and access to weapons.”

Kalmar expects the district to consider every possible measure to help ensure the safety of Almont students, teachers and staff.

“Our next steps will be developing a safety committee to review some new ideas; such as reviewing our lock down protocols, additional technologies, or other measures,” Kalmar said. “We are potentially transitioning to a multi-option model next school year.

“By implementing at the start of the year, we can ensure that training for staff and students is comprehensive and that we have worked through any specific building challenges.”