Masking will no longer be required in St. Clair County schools after Friday

TRI-CITY AREA — St. Clair County’s K-12 mask mandate, due to expire on Friday, will not be extended, the health department announced yesterday.

Dr. Annette Mercatante, Medical Health Officer of the St. Clair County Health Department, issued the order that went into effect on January 3 and will expire at the end of classes on January 28.

In a press release, the department said that COVID-19 case counts in schools have leveled out to a place where they are “manageable.” Additionally, they note that school absences are down and that sufficient staffing levels have been maintained. 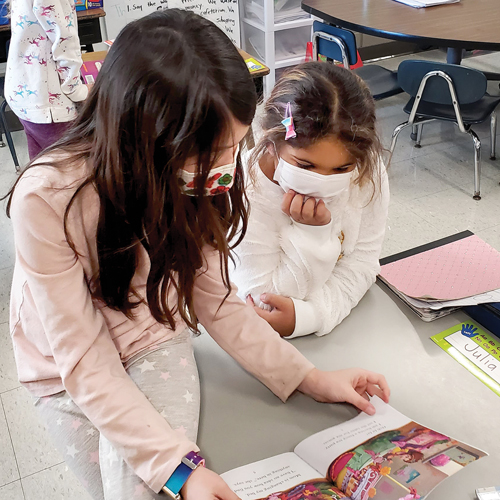 Capac Elementary students spend time with their ‘Reading Buddies’ earlier this month. Since January 3, all students and school staff in St. Clair County were required to wear masks.

“Fortunately, the schools were able to remain open and the mitigation provided by masking met its intended purpose. Also, although local hospitals are challenged, the number of cases in our local hospitals are decreasing. All of this supports Dr. Mercatante’s decision to allow the order to expire. At this point the mitigation measures to be used will be left to the local schools as they had previously requested,” the release stated.

In a graphic shared on their Facebook page, the department says that there were 35 school age COVID cases per day in January with masking as compared to the 85 cases per day they predicted would occur without masking.

According the latest virus statistics, the county’s new cases increased by more than 200 between the second and third weeks of January. A total of 2,101 new cases were reported between Jan. 15-21 along with 25 deaths. The county’s test positivity rate also increased slightly to stand at 37.4 percent.

The department said they still strongly recommend that masks continue to be worn in school settings and all public and crowded spaces until viral transmission rates fall below 10 percent.

According to media reports, the St. Clair County Board of Commissioners is considering reprimanding Dr. Mercatante for the manner in which the mask mandate was communicated to the community in late December.

Last week Lapeer County recorded it’s highest positive test rate since they’ve tracked that statistic. Between Jan 13-19, 41 percent of COVID-19 tests were positive for the virus. Since early January, the test rate has hovered between 30-40 percent.

Additionally, Lapeer County saw the number of new confirmed cases increase between the second and third weeks of January. Nine hundred eighty-three new cases were reported Jan. 15-21 as compared to 768 from Jan. 8-14. Seven deaths were reported last week and that’s down from ten the week prior.

Last week, local hospitalizations for COVID-19 peaked at 23 with six in the intensive care unit.