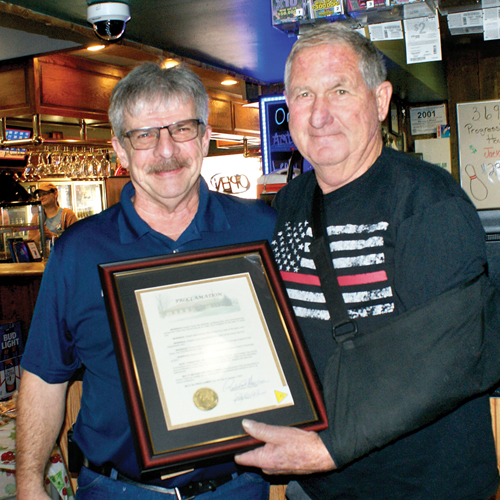 The honorees were veteran firefighters Pat Benson and Bob Tanis, each of whom served many years with the Imlay City department, before retiring in late 2021.

Fire Chief Rick Horton took the opportunity to present this year’s 2021 “Firefighter of the Year” award to Benson.

Though not available to receive the award in person, Benson’s wife Valerie, granddaughter Chander Hill, and great-granddaughter Granger Hill, were present to accept the award on his behalf.

Horton acknowledged both Benson and Tanis for their individual and collective decades of fire service, and for their dedication to the City of Imlay City.

“Both of these individuals gave much and distinguished themselves over the years. I’m very proud to be able to honor them today,” he said.

To further commemorate their long and dedicated service to the fire department, Horton presented Benson and Tanis with plaques and numerous other firefighting awards and pins.

At the conclusion of the program, Horton presented Tanis and Benson’s family members with their respective fire helmets; Benson’s No. 10; and Tanis’s No. 14.

Horton said the annual awards banquet is a fitting way to thank his fellow firefighters and their families.

“It was great to see such a good turnout of firefighters and families at the banquet,” Horton said. “I want them to know how much I appreciate all of their hard work, and what they do for Imlay City.

“It’s not just our veteran firefighters that we honor,” he said. “It’s also a way to thank all of their spouses and families who share in that commitment.”