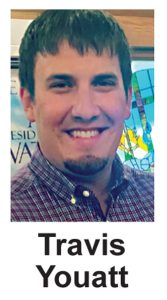 CAPAC — The village officially has a new manager. On January 11, the council held a special meeting where they voted to approve a contract with Travis Youatt.

Per the terms of a two-year contract, Youatt will receive an annual salary of $65,000 for the full-time, 40 hour per week position. He’s also entitled to participate in the village’s health insurance and retirement programs for non-unionized employees and has been granted four weeks of vacation time and one week of sick days per year.

Youatt will be an at-will employee of the village and, as a result, the village council can terminate his employment at any time. Per the terms of the agreement, if the manager is terminated without cause he would receive severance pay.

His first official day on the job will be Monday, January 24.

Youatt was was one of six finalists for the position. He, along with other candidates, were interviewed in-person by councilmembers in December. Youatt was their top pick and they took action on Dec. 21 to start negotiations with Youatt.

The search and hiring process was overseen by Amy Cell Talent, an Ypsilanti-based firm that has recently helped the village of Almont and Lapeer County find new leaders. The council started their search for a part-time manager but have since said they would be open to considering employing someone full-time.

Per the job posting’s job descriptions, Youatt’s responsibilities will include writing grant proposals, administering contract negotiations, direct all human resource functions and supervise all village services and communications, among many others.