DRYDEN — Known for his passion for photography, love of nature and concern and compassion for his fellow veterans, photographer Mike Mercier shone a light in just about every corner of the community.

Today, people from around the area are lighting candles in memory of that glow, and in sadness upon learning of his death on Monday, January 11. Mercier was battling Merkel-cell carcinoma, a rare and aggressive skin cancer. He was 69 years old.

Friends say that his award winning photographs, volunteer service at Seven Ponds Nature Center, work with veterans groups and more, elevated Mercier to icon status in the area, and remember him as an ambassador for good manners, kind words and good stewardship of the land.

“He cared about things,” says longtime friend and fellow photographer Stu Davis. “I traveled around the county with him taking pictures of barns, and he knew everybody, he knew every road, he was friends with everyone in the county. He was just a helluva nice guy.” 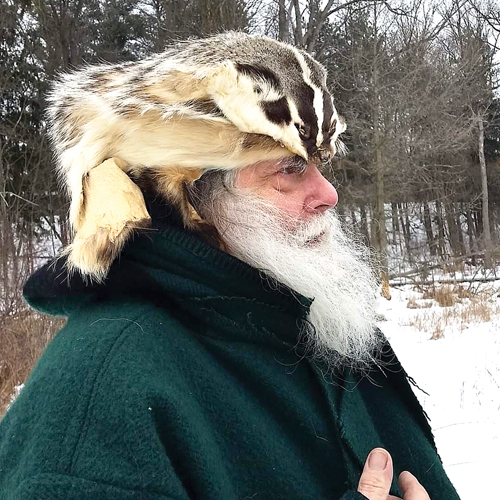 Mike Mercier in traditional garb as he preps to take part in old-fashioned ice cutting at Seven Ponds Winterfest.

Indeed, Mercier’s talents for photography garnered local and national attention. His work was featured in the New York Times and National Geographic. The photos—taken while on vacation with his late wife Donna in the Florida Everglades—featured a rare struggle between an alligator and a Burmese Python snake. Park rangers sent the photos to the New York Times, which featured the photo on their front page. He also appeared on Good Morning America to discuss how he captured the unusual event.

National Geographic flew him back to the Everglades to film a special regarding the unique encounter. Always humble and kind, Mercier said he’d been “very blessed” to be “in the right place at the right time.”

Locally, Mercier was a founding member of the Seven Ponds Camera Club and the nature center’s Bee Club, along with volunteering at many of the Center’s special events.

“Mike was a longtime friend of Seven Ponds, and not only was he present as a volunteer at many events, he always had his camera and he took wonderful photos that shed light on the nature center and shared the impact that the nature center had on so many people,” says Seven Ponds Executive Director Daryl Bernard. “He had a unique gift and talent for that. He was such a positive person.”

Bernard says Mercier’s “positive vibes” were evident to all whose path he crossed.

“He was special and loved by all, and he was a big part of the Seven Ponds family. Everyone he interacted with, he left them feeling better than they were before. We will miss him greatly.”

Mercier began his career in the early 1970s as a photographer for a labor newspaper in public relations. He worked with famed black and white photographer Joe Clark, where he created ads for Jack Daniels whisky. Mercier was adept in the darkroom where he enjoyed restoring vintage photos. He was a staff member at the County Press for 19 years, and a part-time photographer for Tri-City Times for the past six years.

Sharing his passion and talent for photography was a gift to many at Seven Ponds, as was his kind nature.

“He was an encouraging and kind member of our (photography) club and he always had a positive comment,” says LeeAnn McLane-Goetz. “He was a wonderful mentor for members and was willing to share his tips and tricks.”

To keep Mercier’s memory and spirit alive, the Seven Ponds Nature Center Photography Club is holding a fundraiser to purchase a bench—and possibly plant a tree—in his memory. Donations may be made online at https://spnc.photoclubservices.com/default.aspx.

A complete obituary appears on page 13-A.