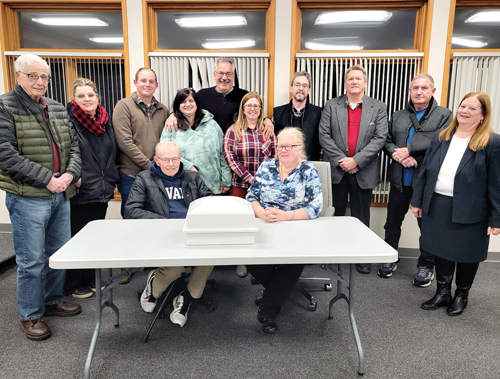 IMLAY CITY — City commissioners discussed matters past and present during the city’s first meeting of the new year on Tuesday, Jan. 4.

Speaking of the past, Carla Jepsen of the Imlay City Historical Society presented the city with a time capsule containing items to not be opened until 2070.

Without revealing the entirety of the capsule’s contents, Jepsen said it contains Imlay City-related items and documents from the past 150 years.

The city’s previous 1970-era time capsule had been buried in the vicinity of the downtown depot and had to be located and dug up by the Imlay City DPW in 2021 in honor of the city’s 150th anniversary of its founding. The capsule was opened during the sesquicentennial event in August.

The new time capsule will be housed inside the city hall for easy access 50 years from now.

In another matter, Fire Chief Rick Horton requested a change to the fire department’s budget to cover the cost of gasoline for firefighters’ personal vehicles when used to drive to fire and emergency scenes.

Chief Horton added that the city’s new tornado siren should be up and running in the spring of 2022.

Imlay City’s Code Enforcement Officer Catherine Riddle reported that residents have been notified they need to shovel snow and apply salt to their sidewalks and walkways. She added that tickets will be issued to those failing to do so.

The city is seeking volunteers to assist senior citizens and disabled residents who are unable to shovel themselves.

•The home on Fourth Street that sustained significant fire damage is slated for demolition.