False threats will have serious consequences

In response, Lapeer County schools and law enforcement officials have been fully engaged in efforts to ensure the safety of students, teachers and staffs; while taking steps to minimize the chances of a similar occurrence in their districts.

Unfortunately, the tragedy has a spawned a small but disruptive number of threats being made by students in Lapeer County schools. 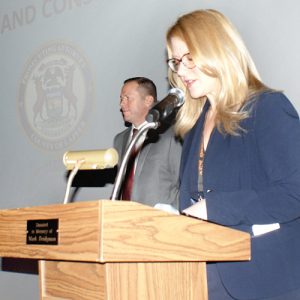 Speaking to three sections of students in grades 7-12, Miller warned of the potentially severe legal consequences for those making such threats; even if they were unfounded or intended to be a joke.

“We can no longer turn a blind eye or take these kinds of threats lightly anymore,” Miller said. “We no longer have that luxury.”

He said students need to consider not only possible criminal charges, but the long-term life consequences for their actions.

He pointed out that students charged with making false threats could find themselves ineligible to enlist in the U.S. military, or to attend certain colleges, universities or trade schools.

“Whether you’re charged with just a misdemeanor or a felony, these behaviors are being treated very seriously by law enforcement and in the courts.”

Miller pointed out that even minor and/or seemingly benign threats are being taken very seriously, and could end up on a student’s permanent record.

“You can compromise your futures if you make a false report,” Miller said. “Anything you post on social media is accessible to police. Whether it’s just a text, a phone message, a photo, or something you said or wrote, it can all be tracked to your actual computer or device.”

He added that should a threat be investigated by police, every social media provider will be notified and must and will cooperate with law enforcement.

“Be aware that you are not smarter than the police,” he stressed.

Miller reminded the students that they have a responsibility to help protect the safety of themselves and others should they have knowledge of a potential threat.

He urged students who hear or see something suspicious online or in their phone messages, to immediately share their concerns and knowledge with a teacher, a parent, the school enforcement officer, or other responsible adult.

Almont Schools Supt. Dr. William Kalmar said Miller’s visit to Almont High School was not in response to false threats having been made by any Almont students.

“The Prosecutor was not here as a response to any specific false threat,” Kalmar said. “He is giving presentations at every school district in the county.

“We really appreciate the time he took to speak to our kids,” Kalmar continued. “That being said, our administration and Police Liaison Officer (Amanda Manning) have spent an inordinate amount of time running down internet hoaxes, social media posts and rumors after the Oxford shootings.

“We have had some students disciplined for their behavior in these matters,” Kalmar said. “But at no time were our students in jeopardy of harm.”