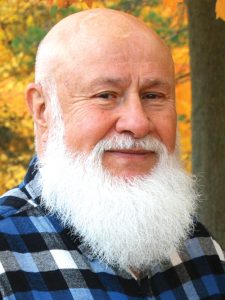 Randy Johnson, age 73, of Lum, MI, died Thursday, December 30, 2021 at his home surrounded by his loving family. Randall Royce Johnson was born December 10, 1948 in Munising, MI. He was the son of the late Alfred Robert and the late Marjanette Anne (Thayer) Johnson. He grew up in Genesee County and he graduated from Beecher High School in Flint in 1967. Randy served in the U. S. Marine Corps during the Vietnam War. He married Julie Verona Pratt on December 23, 1978 in Lapeer, MI.

He then was a resident care aide at Oakdale Center in Lapeer. He retired from the Caro Center State Psychiatric Hospital as a direct caregiver after several years. Randy and Julie enjoyed traveling across our nation until he could no longer physically do so. His greatest joy was spending time with his grandchildren. He always had some kind of special treat for them whenever they came to see grandpa. He was a very active and beloved member of North Goodland Baptist Church.

Randy was preceded in death by his parents, Alfred and Marge Johnson.

Those wishing to make memorial contributions may direct them to the North Goodland Baptist Church.

Please be sure to sign the online register book at www.muirbrothersfh.com to share your memories and condolences with the Johnson family.