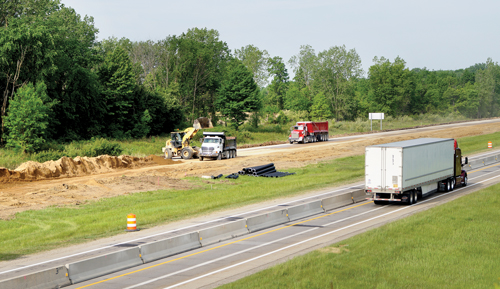 Crews work along eastbound I-69 in Imlay Township in this photo from May of this year. Look for more orange barrels on the interstate in 2022 when several miles between Lake George Road and M-24 are rebuilt.

TRI-CITY AREA — Just as two projects on I-69 have finished, state engineers are gearing up for more work on the freeway in the coming months.

In 2022, the Michigan Department of Transportation will rebuild I-69 between Lake George Rd. in Attica Township and M-24 in Lapeer Township.

“The contractor did an amazing job expediting the schedule,” said Jocelyn Garza, communications representative for the Michigan Department of Transportation’s Bay Region.

“They submitted a proposal to complete the work in one year, and were able to stay on their target throughout the construction season. If they had not been able to finish the work in one year they would not have faced any financial penalties, because our contract was written as a two-year project.”

The reconstruction work encompassed 6.55 miles of the freeway between the Cox-Doty Drain in Mussey Township to M-19 in Riley Twp. and was expected to extend over two seasons, concluding in November 2022. The $38 million project was expected to support 482 jobs.

“I’m sure local residents and commuters are going to be pleased to have that work zone open for the entire summer, instead of dealing with another season of lane and ramp closures,” Garza said.

In Lapeer County, 8.3 miles of I-69 were resurfaced between Newark Road in Attica Township and the St. Clair County line in Lapeer County. The $28 million job was expected to support more than 350 jobs. Garza said the project appears to be mostly on budget.

“With the work recently finished, all the finances are not complete yet and we will have to wait until spring to complete final pavement markings when the weather is warmer,” Garza said.

“So while the road is free and clear for drivers, we will have paperwork and final reviews to finish on our end.”

Both 2021 projects, completed by Dan’s Excavating, Inc., were funded through the state’s Rebuilding Michigan program, a bonding plan announced by Governor Gretchen Whitmer and approved by the State Transportation Commission that authorized $3 billion for road and bridge repairs.

The 2022 Lapeer County project will also be funded with Rebuilding Michigan bond funds. Garza said that Toebe Construction was awarded the contract for the work. Their bid for a complete rebuild came in at $54.5 million.

Also next year, another 9.5 mile stretch of I-69 east of this year’s St. Clair County project will also be rebuilt between M-19 and Taylor Road.

Looking further ahead, MDOT plans to return to Lapeer County and reconstruct I-69 between Newark and Lake George roads in 2025. Once that’s done, all of I-69 from Lapeer County’s eastern boundary to M-24 will have been rehabbed in five year’s time.