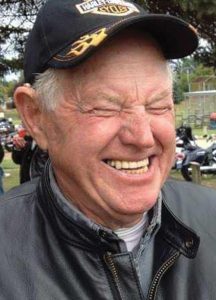 Milton Hosler, age 84, of Dryden, MI died Monday, December 27, 2021 at his home in Dryden. Milton Bernard Hosler (known as Mick) was born September 15, 1937 in Milan, MI. He was the son of Walter Woodbridge and Augusta (Herkimer) Hosler. He grew up In Milan, MI; He was a graduate of the School of Hard Knocks. He moved to the Dryden area in the early 1960s. Mick married Chris D. Domzalski Roy on September 4, 2015 in Lapeer, MI.

Mick was a professional driver. He drove for Champion Home Builders delivering mobile homes around the country. He worked at and retired from Ford Motor Co. Romeo Proving. Mick was an avid motorcycle enthusiast, devoted to Harley-Davidsons. He loved drag racing and would race every chance he got. Mick was an enthusiastic hunter, eager to process his prey. He held several jobs in Dryden including co-owner of Fred & Mick’s Arco gas station, DPW worker, custodian at Dryden schools and worked as a Dryden Twp. police officer. He also was on the volunteer Dryden Fire Dept. for many years.

Please be sure to sign the online register book at www.muirbrothersfh.com to share your memories and condolences with the Hosler family.

In lieu of flowers, memorial contributions may be made to: Michigan Humane Society, Wish Hunt of the Safari Club International – Flint Chapter, or Dryden Schools.