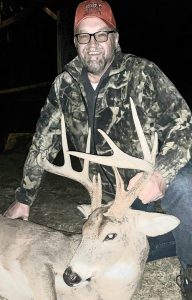 Kenneth “Gerald” Nelson, 60, a lifelong resident of the Imlay City area, was called home by his Lord and Savior on January 1, 2022. Gerald was born on May 14, 1961, to Gary and Beverly Upleger Nelson. He attended Lum Elementary and Imlay City Schools, graduating from Imlay City in 1979. He was a proud member of Future Farmers of America while in high school.

Gerald was born to be a farmer and spent his entire career in agriculture. Most recently Gerald was self-employed, growing soybeans, wheat, hay and asparagus. Gerald was a maple syrup producer. He started with a very small backyard operation 30 years ago and steadily expanded Nelson Maple Products until he was producing several hundred gallons of maple syrup in the spring. And since farming and syrup making are family enterprises, he always enjoyed the help of his wife and children, especially his son, Alan.

Gerald was a member of the Goodland Community Church and helped with the construction of the large addition. Gerald enjoyed hunting. For many years he ran rabbits with his beagles. He was a deer hunter and harvested many bucks from his farm in Goodland Township. He also enjoyed several out-of-state hunts with his son and friends to Wyoming, Manitoba, Illinois, Alabama, Tennessee, Nebraska, Missouri and Kansas. But most of all Gerald dearly loved spending time with his family and friends. He was a people person and so enjoyed being surrounded by those he loved and having parties in his sugar shack.

Gerald is survived by Katherine, his wife of 34 years; his daughter, Laura (Mike) Mills of Riley Twp; and his son, Alan (Becki) of Imlay City. Gerald was so proud to be a grandpa and dearly loved his grandson. He is survived by his grandson, Leo Mills, and a grandson arriving in March. He is also survived by brothers, Marty of Los Angeles, CA; Mark of Kalamazoo; Preston (Julie) of Lancaster PA; sister, Missy (Gordon) Morris of Lapeer; Richard Lindsay of Lapeer and June Nelson of Brown City. Also brothers-in-law Jim (Tamyra) Philp of Ubly and Andy (Kelly) Philp of Frankenmuth. Also surviving are nieces and nephews whom he adored.

He was preceded in death by his parents, Gary Nelson and Beverly Nelson Lindsay.

A Celebration of Gerald’s life is being planned for later in the spring or summer.

Please be sure to sign the online register at muirbrothersfh.com to share condolences and memories with the Nelson family.