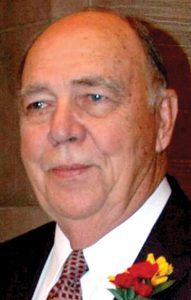 Gail Kay Nash, 82, passed away the morning of December 26, 2021, surrounded by family in his home. Born February 11, 1939 in the Pontiac Hospital, he grew up in Elba, Grand Blanc and North Branch in the care of his adoptive parents, Guy William and Vera Mae Nash, with his sister, Nadine. He graduated from North Branch High School and moved to Imlay City in 1966.

Gail was dedicated to his community, working as an Imlay City police officer as well as a lieutenant and assistant chief for the Imlay City Fire Department. He later worked at the Memphis, MI police department, where he served as sergeant, lieutenant and chief, as well as the first Drug Abuse Resistance Education (DARE) officer in the City of Memphis. Gail also worked as an EMT on the Imlay City ambulance service. After retirement Gail spent a few years as a member of the Imlay City Parks and Rec. Commission.

Gail married Dorothy Darlene Butler on February 14, 1959, and again for old times’ sake, on May 29, 2016. Together they had five children and seven grandchildren whom he loved dearly. Recently, he did an Ancestry DNA test and discovered his biological family. He and his newly found brother, Harold, became very close.

A Celebration of Life is being planned for a date in May 2022, where the family and friends can get together.

Please be sure to sign the online register book at www.muirbrothersfh.com to share your memories and condolences with the Nash family.