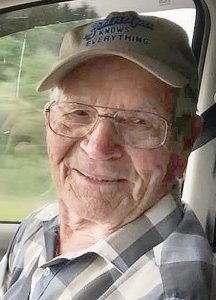 Forrest Dudley, age 96, of Dryden, MI died Monday, December 27, 2021 at McLaren Lapeer Region Hospital. Forrest Smith Dudley was born May 19, 1925. He was the son of the late Harvey and the late Emma (Smith) Dudley. He grew up in Brown City, MI. He attended Sharpsville Country School near Brown City. He has lived in Dryden since 1963. He married Doris Elizabeth Goodwin on August 14, 1965 in Brown City. Doris died in 2016.

Forrest retired from Turnstead making parts for General Motors. He worked as a machine operator for 36-plus years in auto parts manufacturing. He had worked for National Twist Drill in Rochester in the early 1980s.

He was preceded in death by a grandson, Steven Joseph Dudley; his son-in-law, David Moore; a brother, Arnold Dudley; and his sister, Irene Boven.

Please be sure to sign the online register book at www.muirbrothersfh.com to share your memories and condolences with the Dudley family.