CAPAC — The collection of creatures that call Capac Jr.-Sr. High School home continues to grow. In addition to those that walk on two or four feet, water dwellers—specifically perch and channel catfish—are now under the care of the school’s science program.

In a nod to the district’s heritage, teacher Samantha Ellison has also made a home on campus for some bobwhite quail. 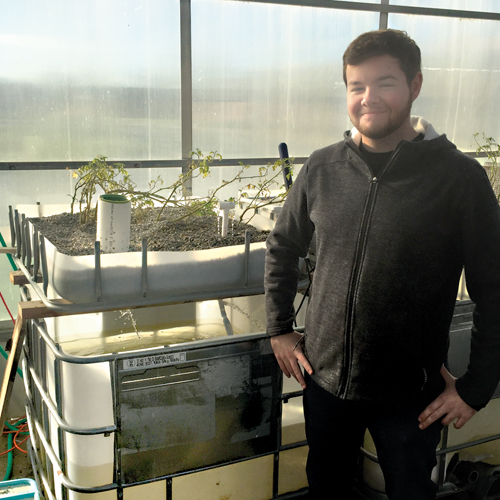 Corey McGlynn, an environmental science student, with one of the school’s new aquaponics tanks.

Bobwhite quail are the only native quail species in Michigan and their populations have been in decline.

Currently, students are tending to eight breeding-age adult birds with hopes of hatching 100 chicks in the spring. At 12-16 weeks old, the students then plan to release them into the wild locally.

Quail have very particular light requirements and students must be vigilant in maintaining proper protein levels in the birds’ diet. In their aim to provide a more natural diet, Capac students are raising crickets to feed to the quail.

“None of my students in my environmental science class have ever seen this species in the wild and most folks, unless they’re avid hunters, haven’t heard of them,” Ellison said.

Upon coming to Capac as the new ag teacher and FFA advisor last year, Ellison heard many stories about the origin of the school’s barn.

“When it was first built, the barn was primarily used to raise ringneck pheasants so we decided to put a new spin on that and bring quail into the program,” she said.

“I know it’s important in our local community to support wildlife and we look forward to being able to do that.”

Bond dollars were used for upgrades to the existing greenhouse and the national FFA Foundation awarded them grant dollars to purchase supplies and all of the soil was donated by The Scotts Company/Hyponex.

“The kids got to put the raised beds together the first couple months of the school year and since then they’ve created their own projects, choosing fruits and vegetables to grow and then sell or make products from that they’ll sell,” Ellison said.

Those projects range from growing and selling fresh lettuces and herbs to creating salsa from tomatoes and peppers grown on site.

Perch and channel catfish live in the lower part of the tanks and there are tomatoes growing in the top growing beds.

“Students are monitoring the number of plants at the top as it relates to the number of fish in the bottom to ensure that the nutrient rates are maintained,” Ellison said.

This project is offering an excellent opportunity for students to learn about water quality, she said.

Like the quail, the school plans to release the the fish in local waterways in the near future.

The tanks were donated by the Stuever and Lauwers families and the pea stone used in the growing beds was given by Todd Meldrum Stone Yard.

“We are very grateful to the community for giving back to the program like they have,” Ellison said.