Gate presides over cemetery once again 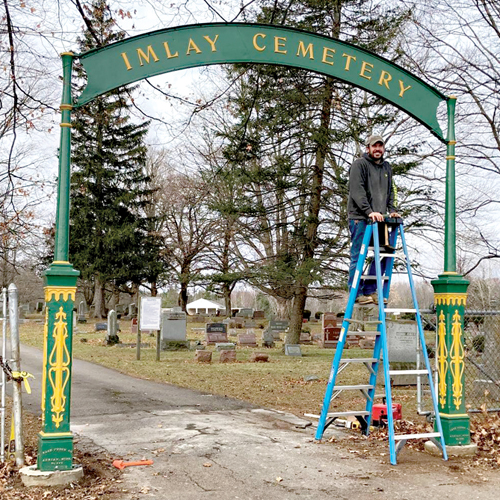 Craftsman Rick Thompson made repairs to the cast iron structure and repainted it.

IMLAY TWP. — The township’s 100-plus year-old cemetery gate has been restored and returned to its home.

Since last September, the cast iron structure has been in the workshop of Rick Thompson of Thompson Heritage Woodworking where it was repaired and repainted.

In early December, Thompson and township officials reinstalled the gate at the cemetery.

“We removed all of the original paint before performing a variety of repairs to correct some damage and earlier on-the-fly fixes from years past. It then received a fresh paint job before it was ready to go back into place at a new location flanking the cemetery entrance in front of the township offices,” according to a post on Thompson’s business Facebook page.

Although “home,” the gate was installed in a new location at the cemetery.

“We decided to move the gate one drive north from where it was originally,” Clerk Carla Jepsen said.

When the gate was taken down last year and cleaned, Thompson was able to undercover the maker’s mark—Page Fence Company of Adrian, Michigan. He notes that years of road construction had raised the grade to the point that the lower portion of the gate was underground.

He estimates that the structure was likely placed at the cemetery in the early 1900s.

Thompson thanked Matt Elling, Supervisor Steve Hoeksema and trustee Chad Stoldt for helping with the reinstallation. He gave kudos to Jepsen and township Treasurer Melanie Priehs for getting the project underway.

“History like this needs to be saved and their efforts helped make sure that this gate received the attention it deserved. Proud to be a part of preserving a part of our town’s history,” Thompson wrote.

According to information compiled by the Imlay City Historical Commission, the cemetery dates back to the 1850s. When it was acquired by the township, gravestones indicated that someone had been buried there in 1855. Death records weren’t officially kept in Lapeer County until 1867.

The original panels or doors of the cemetery gate were restored by the Commission about eight years ago and are currently on display at the Imlay City
Museum.