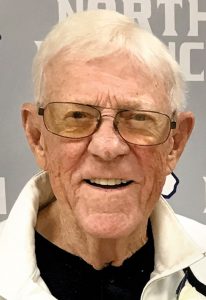 Donald Smeznik, age 89, of Kings Mill, MI died Sunday, December 26, 2021 at The Pines of Lapeer. Donald Robert Smeznik was born May 26, 1932 in Cleveland, OH. He was the son of the late Frank and the late Dorothy (Hazeltine) Smeznik. He grew up in Cleveland, OH and was a graduate of West Technical High School in Cleveland. He married Joanne Bonza on June 23, 1956 in Cleveland, OH. Donald served in the U.S. Navy; he was a veteran of the Korean War. He started out in iron work construction in Ohio, but he soon changed over to education. Don earned his bachelor’s degree in education from Bowling Green University and his master’s degree in educational administration from Central Michigan University.

Don was a teacher, an all-sports coach for over 56 years, (having worked in North Branch, Dryden, Marlette and Yale). Don was honored and inducted by the Michigan High School Athletic Association with placement in the Hall of Fame. He was also recently honored by the North Branch Athletic Department by induction into their Hall of Fame. He was a member of the American Legion.

Please be sure to sign the online register book at www.muirbrothersfh.com to share your memories and condolences with the Smeznik family.