TRI-CITY AREA — The year 2021 delivered it’s fair share of headline-making news. The Tri-City area, along with the rest of the world, continued to deal with the COVID-19 pandemic but 2021 also brought the return of annual events that had taken a year’s hiatus in 2020 due to the virus, allowing for a return to some normalcy.

The year also brought the usual amount of both triumphs and tragedy too.

Here’s a recap of some of the biggest stories from 2021.

•On Nov. 16, Imlay City commissioners approved a new two-year contract with the Imlay City Police Department. The department had been operating under the terms of a contract that expired on June 30, 2021.

The new contract includes a 2.5% wage increase and incentives to attract new officers and encourage veteran officers to remain in Imlay City.

The agreement followed a period uncertainty about the status of the ICPD. In April, city commissioners considered disbanding the Imlay City Police Department and contracting with the Lapeer County Sheriff’s Department for the purpose of reducing costs. The vast majority of residents expressed their opposition to the idea during an April 29 community forum at the Eastern Michigan State Fairgrounds. On May 4, commissioners agreed unanimously to not pursue a contract with the Sheriff’s Department and to hire a new full-time police chief to succeed the recently retired Scott Pike. Brett Selby was selected to lead the department in August 2021.

Tragedy impacted local families over the past 12 months.

•On July 19, a widespread search began for 79-year-old Dryden Township resident Joe Mindelli, who had gone missing in area of Rochester and Casey roads.

Peters said that in those varied capacities, approximately 22 of the 36 square miles of Dryden Township had been searched.

The search ended tragically on July 29, when Mindelli’s body was recovered from a small lake off Mill Road, less than a mile from his home.

•On June 22, the body of a deceased man was discovered near a dumpster located behind the Imlay City Burger King.

Following an investigation, the man was identified as Gary Friday, a former employee at the restaurant. Further investigation revealed that Friday did not have a permanent home and that he died from smoke inhalation after starting a fire in or near the dumpster to keep warm.

In 2021, the Tri-City area saw several manufacturers close their doors.

•In October, Champion Bus’s parent company announced that the Imlay Township business would be permanently closed by year’s end.

Forest River said the ongoing shortage of chassis was to blame for the plant being shuttered, resulting in the loss of about 100 jobs.

The brand and manufacturing capability is due to be moved to Forest River’s existing bus facilities in Elkhart, Indiana.

Last year, Champion Bus was sold by REV Group to Forest River, a Berkshire Hathaway subsidiary for an undisclosed amount. ElDorado Bus, the other REV group brand acquired by Forest River at that same time, saw it’s Salina, Kansas plant shuttered in May of this year. According to media reports, the company said then the closure was due to a reduction in business caused by the pandemic. A portion of that brand name’s production was moved to Imlay City. Once the Champion facility closes in Imlay Twp., all of Forest River’s remaining bus manufacturing will be centralized in Elkhart and Goshen, Indiana.

The company was founded as Champion Home Builders in 1953 and entered the commercial bus business in 1981. Thor Industries purchased the business in 1988 from Champion Enterprises of Auburn Hills. Since then Champion Bus has had several different owners.

•In April, the Keihin Michigan Manufacturing plant in Capac formally ceased full production. The closure had been announced in early 2020 and the company gradually whittled down its former staff of 165 employees to a number sufficient to continue meeting preexisting contractual demands and obligations.

The plant, in operation since 2008, started out making intake manifolds and HVAC systems for several Honda models, including the Civic and Accord.

The facility was put up for sale this summer with a $9.9 million asking price.

•In March, Grabill Windows & Doors announced the Almont company was closing in the summer of 2021. It’s parent company, Pella Windows, indicated that the August closing reflected market changes and a need to achieve maximum efficiency.

Developers sought to create a variety of new businesses in the region but the public opposition to some prevented that from happening.

Residents speak out against RV park

•In January the Imlay Township Board voted to deny a special land use permit submitted by the developers of a proposed RV park on Bowman Road.

Preliminary plans for the Sundance Shores RV Park called for more than 300 lots situated on the site of a former gravel pit owned by the Racz family. Prior to that vote the planning commission had recommended that the request be denied.

During a meeting held virtually, many area residents spoke in opposition to the proposed development saying they had concerns regarding high traffic volumes, the impact on property values, excessive noise, the potential for trespassing and more. Imlay Township’s zoning ordinance allows campgrounds as a special land use for property zoned ag/residential.

Later in 2021, the property owners submitted a site plan for condominiums to be built on the site originally proposed for the RV park. The initial plan approved was considered a “concept plan” and township officials said that a more detailed plan would be forthcoming.

•On June 14, the Berlin Township Planning Commission voted unanimously to deny a request from local developer Chris Nanni who sought rezoning to a parcel of property on the east side of Capac Rd., south of Almont Rd. from multiple dwellings to B-1, as the future site for a new Dollar General store. Board members voiced concerns about the proposed development’s location directly adjacent to and across from residential properties. Board member Mark Wittstock cited the proposed development deviates from the township’s “master plan,” noting that the township already has an area designated for such development. He added that such development could be considered an example of “spot zoning” within the township. 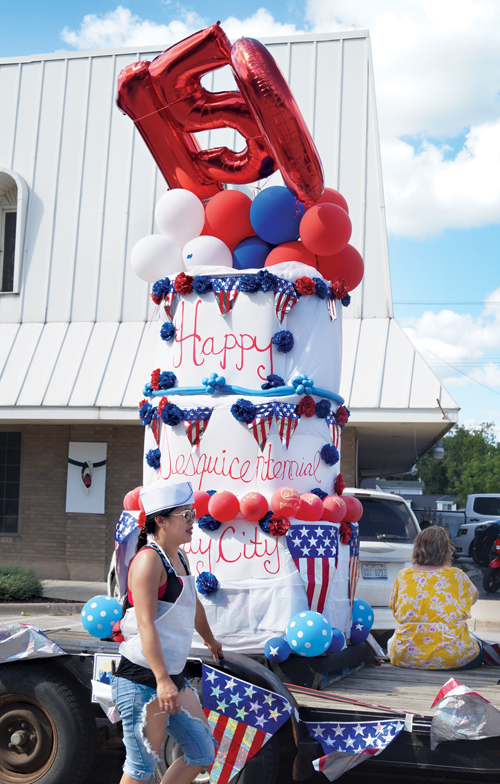 Kroger and other participants in the Sesquicentennial parade helped Imlay City celebrate the 150th anniversary of its founding.

Many favorite events were able to return in 2021 after having been canceled in 2020 due to the pandemic.

Favorable weather and eager crowds meant the 2021 Eastern Michigan State Fair set attendance records. Manager Ian Kempf said that gate attendance was up 32 percent from 2019—the fair’s second biggest year on record up to that point.

In 2020, the fair only included a limited livestock showing component.

•Having had to cancel Imlay City’s 2020 Sesquicentennial due to the pandemic, the Imlay City Area Chamber of Commerce decided to reschedule the city’s 150th anniversary celebration for Aug. 13-14, 2021. The family-friendly event featured a Sesquicentennial Parade, live entertainment, a fireworks display, food and craft vendors, games and activities for children, and a beverage tent inside the old fire hall.

•In June, the inaugural Sasquatch UnCut beard and mustache contest was held in Imlay City. More than 100 competitors flocked downtown for the two-day event that saw judges handing out awards for the best and most unique facial hair among men, women and youth contestants.

•Capac Days returned in June and in September Almont hosted their Heritage Festival and Dryden put together plans for their Fall Festival. All of our local communities also held holiday-related events and parades in November and December. Plans for Almont’s Homecoming, originally scheduled for 2020, were delayed again in 2021 due to the pandemic.

•The sale of the former Capac Middle School was finalized in October. Jeff Kegler, Greg McConnell, Ryan Kersten and Chris Nanni were the purchasers of record. According to Capac Schools Supt. Jeff Terpenning they paid $290,000 for the school and the property it sits on, plus $25,000 for a parking lot directly across from the school on the east side of Neeper Street with the school district and village sharing the proceeds.

The new owners plan to turn the historic building into apartments for senior citizens. In July, the village’s planning commission and council approved a request to rezone the Neeper St. property from single to multi-family housing. The former middle school has been mostly vacant since middle school classes were moved to the elementary and high schools in 2016 as part of a reorganization plan.

•Almont’s Country Smoke House reopened their retail store in March, nearly one and a half years after a fire devastated the building.

•In March, local firefighters responded to dozens of field fire calls. Strong winds and dry conditions contributed to the spate of calls.

•Imlay City Schools’ campus bustled with construction-related activity this summer as crews dove into a number of projects funded by the 2019 bond, including the creation of a new classroom addition at Weston Elementary School and a performing arts center at the high school. The start of the school year was delayed by one week in August due to the construction work. Contractors had encountered delays due to weather and material shortages including issues caused by the pandemic.

•For a span of several months, Almont village officials and the Kingsbrook mobile home park wrangled over past due utility

bills. In May of this year, some council members raised the possibility of shutting off water service to the park. In November, park representatives and village officials agreed to the terms of the latest payment plan that would make their outstanding bill current by March.

•In May, firefighters from dozens of departments in Lapeer and surrounding counties responded to a massive structure fire at Jim’s Recycling in Arcadia Township. No one was hurt in the incident but the business was severely damaged.

•In October, Almont’s Orchard Primary School was recognized by U.S. News & World Report as one of Michigan’s best elementary schools in 2021.