A season marred by delays, cancellations and COVID concerns

TRI-CITY AREA — The 2021 high school sports season took awhile to get underway what with delays due to COVID-19 concerns, but when it did there certainly was no shortage of highlights to mention.

Here is a rundown of the top high school sports stories this past year:

The Imlay City girls’ basketball team earned their first-ever Division 2 regional championship, accomplishing the feat with a 42-35 triumph against Lutheran North in the title game it hosted Wednesday, March 31.

Ortonville-Brandon High School is where the action, unfolded.

The Blue Water Area Conference champions, which posted a 56-33 win against Almont in their district championship on March 26, watched an outstanding 15-4 season reach an endpoint.

Van Andel Arena, in Grand Rapids, is where the matches were contested.

Frangedakis reached the title bout where he dropped a 5-0 decision to Clinton’s Connor Younts.

Frangedakis and Tank concluded their seasons with 22-5 and 25-5 marks, respectively.

Wings Event Center, in Kalamazoo, is where the action unfolded.

Stanton finished his successful run with a 4-1 victory over Whitehall’s Ty Whalen.

Dwyer wrapped up his stint at states with a narrow 3-1 loss to Kingsford’s Toby Wilcox.

Stanton and Dwyer wrapped up their seasons with 29-5 and 25-6 marks, respectively. 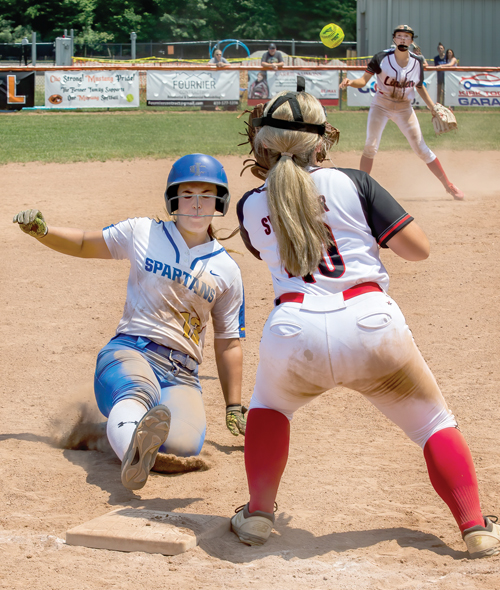 Imlay City’s Natalie Stone arrives safely on a bunt by Abigail Thibodeau during a Div. 2 regional clash versus Linden.

Rojas closed out his run at states with a spot in the third place match. It was there he was pinned by Dewitt’s Kiefer Kolito with 2:22 gone.

Mary Lengemann saw to it that she would etch her name in the record books, surpassing the 1,000-point plateau for her career in a 62-29 win against visiting conference foe Richmond last Friday night.

Lengemann, a senior, netted 1,00th and 1,001st career points when she converted a layup with 6:57 to play before halftime. That upped her point total to 15 for the evening and staked Imlay City to a 25-10 lead at the time.

She would add 20 more points the rest of the way, helping Imlay City register a 65-29 triumph.

Lengemann becomes just the fourth player to surpass the 1,000-point plateau. Milli Martinez, Tracey (Moenaert) Combs and Ashyon Combs were the others to accomplish the feat.

The Capac boys’ track team notched one placewinning performance on the way to a 50th last Saturday at the Division 3 state finals.

Jenison High School is where the meet was contested.

For his showing, Tank draws All-State plaudits (awarded to the top-eight placewinners in each event).

Baldwin Street Middle School, in Hudsonville, is where the meet was contested.

For their performances, Boettcher and Kage earned All-State accolades (given to the top-eight finishers in each event).

Jesse Kautz led Almont with a medalist round of 84 over 18 holes.

Almont would also earn the right to compete October 15-16 at the Division 4 state golf finals.

Forest Akers East Golf Course, in East Lansing, is where the action unfolded.

The Imlay City boys’ soccer team put the finishing touches on a 12-0 Blue Water Area Conference campaign with a 5-0 road triumph against Cros-Lex on Monday, October 11.

It marked the fifth straight year that Imlay City has ended BWAC play as champions.

Nine days later, Imlay City would add a Division 3 district title to their list of accomplishments.

Playing at home, sixth-rated Imlay City saw to it their season would last a bit longer with a 4-0 triumph against Richmond.

Lansing Catholic is where the match was contested.

Imlay City concluded the season as owners of a 21-4-1 mark.

A week later, Imlay City (listed among the honorable mention teams in the statewide rankings) exited tournament action with a 9-4 setback to sixth-ranked Linden in a Division 2 regional semifinal softball battle.

Clio High School is where the contest took place.

With the decision, Imlay City watches an outstanding 27-14 campaign reach an endpoint.

Capac would gain a number one district showing as well, rolling to a 14-1 win agahost Oakland Christian in a Division 3 softball district game on Saturday, June 5.

They then bowed out of tournament action a week later with a 13-0 loss to second-ranked Richmond, the eventual state champions.

Millington High School is where the action unfolded.

With the outcome, Capac finished at 14-8.

Dryden claimed their district title, posting a 15-0 victory over Genesee in the championship game it hosted.

Unionville Sebewaing is where the game was contested.

With the outcome, Capac improves to 18-3 this season.

In Wednesday’s district action, Capac opened with a 39-30 win against Memphis.

Capac then met New Haven for district honors next.

When the final scores were tallied, Capac posted a convincing 57-6 victory.

Capac was to have faced Mayville in a regional March 31 in Clinton, but both teams opted out of that contest.

School board members, at their November 18 regular meeting, approved a proposal to transition Capac High School’s football program to the North Central Thumb League for the next two seasons.

The league follows an 8-man football format. All other Capac athletic programs will remain in the Greater Thumb Conference.

Linden High School is where the action unfolded.

With the decision, Almont finished at 21-8.

The Almont football team advances to the district championship game before seeing their tournament path halted (November 3 and 10 issues).

Almont, which was making their 13th straight playoff appearance and 15th over a 16-year stretch, began Division 6, Region 4, District 1 postseason action with a 35-0 road win against Clawson on Friday, October 29.

Madison Heights Bishop Foley High School is where the game was contested.

Brandon Hunsaker, a senior, garnered attention at a linebacker spot.

This past fall he supplied 25 solo and 72 assisted stops.

Mason Smith, a senior, made the lineup for his prowess as a defensive back. He wound up with 21 solo tackles, 38 assisted stops and registered one forced fumble en route.

Jack Jellison led Almont with a 72 over 18 holes that day. His effort was the second best overall round.

The Dryden varsity volleyball team saw to it they would earn the distinction of North Central Thumb League Stars Division champions, accomplishing the feat with a 25-18, 25-22, 25-11 triumph against visiting Deckerville on Tuesday, October 26.

With the outcome, Dryden improves their mark to 15-1 overall and 12-1 as far as NCTL clashes are concerned.

The Dryden varsity boys’ basketball team saw to it that a top NCTL finish would belong to them, accomplishing the feat with a 50-24 rout of visiting Peck in a contest on Tuesday, March 16.
With the decision, Dryden improves to 11-2 and 8-0.