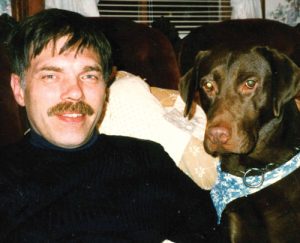 William Dennis Richey, 71, of Imlay City passed away December 19, 2021. Bill was the oldest of nine children born to William O. and Mary (Brown) Richey. Bill attended St. Leonard’s Catholic Elementary School in Warren and then had the privilege of attending Detroit Aeromechanics Trade School (on the grounds of Detroit City Airport) for high school. He spent one semester at East Detroit High to get his accreditations for his high school degree. Bill’s heart was always into anything mechanical or aeronautical. Upon graduation, he went to work for Jim Wernig Chevrolet in Almont. When Uncle Sam came calling in 1969 Bill proudly enlisted, proclaiming to the recruiter that he could be an A/P mechanic and he didn’t need much training due to his education. His reply was, “Son, we have all the mechanics we need, we need air crew.” Bill spent the next two years flying in Hueys and Cobras over the skies of Vietnam with the 1st Cavalry Air Assault Battalion Alpha 229. He made it back home after making lasting friendships that had sustained and grown to his very last day. Bill was awarded many medals including five purple hearts, National Defense Service Medal, Vietnam Service Medal with two stars, Vietnam Campaign Medal w/60 device, Air Medal, and a Bronze Star Medal. Bill was and always will be a Cavalryman because when the 1st Cavalry flew in even the Devil shuddered in fear. Once he returned stateside, he earned a commercial pilot’s license and ended up flying cargo all around the U.S. He married Marlene Watt and together they had two daughters. The marriage dissolved and Bill later married Teresa Coucke, his wife and companion of 42 years. Bill worked in auto dealership management for 45 years. He received a certificate of management from Kettering University for dealership management and later retired at the age of 64 to help his youngest daughter, Shelbi, restore an old house she purchased. Those two were quite the team, taking on the “almost impossible” and making it look easy! That project lasted almost two years, at which time (summer 2015) cancer came calling. He fought the good fight for over six years.

Bill was preceded in death by parents; siblings, David, Christopher and Kimberly; and in-laws Nancy, Michel and Betty Coucke. He will be greatly missed because he was greatly loved.

In lieu of flowers, memorial contributions may be made to Hawkeye and Friends, 8970 E. Capac Road, Imlay City 48444 in honor of his faithful canine companions, Kobe and Ozzie.

The family will be available for visiting hours from 12 Noon until 2 p.m. Wednesday, December 22 at the funeral home.

A private/family interment will take place at Great Lakes National Cemetery in Holly the following week.

Please be sure to sign the online register book at www.muirbrothersfh.com to share your memories and condolences with the Richey family.