New owner off to fresh start at Charlie Brown’s 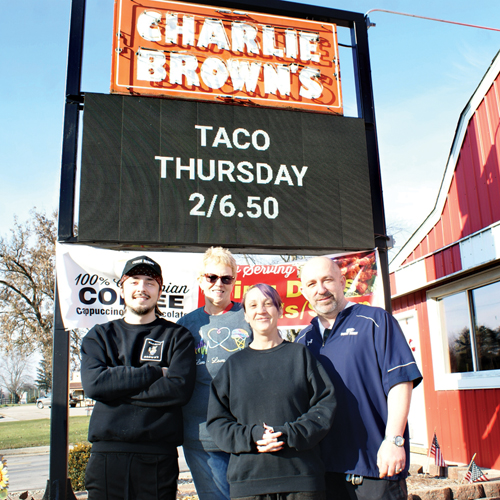 Charlie Brown’s owner Mark Dedvukaj (far right) is joined for a photo in front of the restaurant’s new marquee by son, Alex; employee, Kitty Storey; and his wife, Francine.

ALMONT — Charlie Brown’s Ice Cream & Restaurant at 750 N. Van Dyke has long been a fixture and a destination for Almont families and visitors.

But after 22 years of serving up ice cream cones, sundaes, and chili dogs, business owners Michele and Randy Breen were ready to sell the building and business.

Enter fellow Almont resident Mark Dedvukaj, who was equally ready to seize the opportunity to purchase the business and building.

An Almont resident for five years, Dedvukaj has 30-plus years experience in the restaurant business, including the past seven years as the owner/operator of the Hilltop Coney Diner in Marlette.

He said opening another restaurant had not been in his plans.

“I wasn’t really looking to start another business,” Dedvukaj admitted. “When the opportunity to buy the building from the Breens presented itself, I knew I wanted to do it.

“I’ve worked hard all my life, and decided I wanted to invest in Almont, which is now home for both me and my family.”

And now, so, too, is Charlie Brown’s.

“This is a family business,” he said, “and we’re going to treat our employees and our customers like they are family, too.”

Dedvukaj said he may have gotten off on the wrong foot with some customers when he changed some menu items; and for modernizing the restaurant’s marquee, which now features digital lettering and messages.

“The previous owners would climb a ladder to change the letters on the marquee by hand,” he said. “I don’t want my employees to be doing that and get hurt.

“I also didn’t realize how important the Tuesday and Thursday ‘Taco Days’ were to customers,” he admitted. “But a lot of people let me know, so we’re continuing with the Taco Days.”

He still intends to offer some new menu items such as corned beef sandwiches, melts, fresh salads and burgers “made to order.”

Dedvukaj added that when weather permits, he plans to make some upgrades to the building and grounds, including a gazebo, fencing and seating for outdoor dining.