Beulah, who served as a “Rosie the Riveter” during World War II, was acknowledged at her party by friends, family, and representatives from Michigan’s WOW Chapter of Rosie the Riveters.

WOW Chapter President Bette Kenward was present to celebrate the special occasion and to bestow best wishes on Beulah. 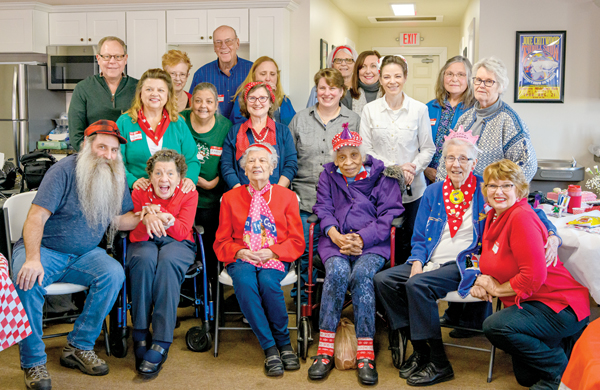 Beulah McCallister (in pink crown) is surrounded by friends, family and fellow ‘Rosie the Riveters’ during her 98th birthday party held in her honor at the Eastern Michigan State Fairgrounds.

Kenward described her as a gift from the past to today’s generation of Americans.

“Beulah is an amazing lady,” said Kenward. “It was such an honor to celebrate our own hometown Rosie the Riveter.

“In the short time we have gotten to know one another we are building a wonderful bond.

“I am so lucky and honored to be able to spend time with her family and friends and to keep her legacy alive.

“Beulah is part of the Greatest Generation. We must never forget.”

Local photographers Jim and Bobbi Lewis, who are avid supporters of all Rosie the Riveters, were present to document the event for posterity.

“Beulah was ecstatic to see everyone there to celebrate her birthday,” said Jim Lewis. “There was a lot of crying and sharing of emotions.”

He pointed out that Beulah continues to enjoy her favorite hobbies; painting and quilting.

“She’s just a wonderful person,” Lewis said. “She’s someone who makes you feel like you’ve known her all your life.”

For more information about the WOW Chapter of Rosie the Riveters, or to help address valentine cards, contact Bette Kenward at 586-295-0417.