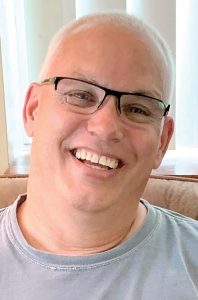 Bob Klein of Capac was called home to his eternal reward Thursday, Dec 16, 2021. Robert Jay Klein was born April 12, 1964 in Yale, MI, son of June (Summers) and the late Max Klein. Bob, nicknamed Paco by his family, grew up in Allenton on his parents’ vegetable farm with his ten siblings where he learned perseverance and a work ethic like no other (not to mention how to hurl a green tomato). A 1982 graduate from Almont High School, he nurtured many friendships that transformed into family. Everyone who met Bob liked him from the first and then came to love him! He was near impossible not to like; ask anyone who knew him. He was united in Holy Matrimony to Beth Ann Pytleski on June 29, 1996 at Saint John the Evangelist Parish in Allenton. Together they had five beautiful children: Theresa, Anna, Max, MaryBeth and Nathan.

For the past 26 years he worked at L&L Products in Romeo as a machine operator. Bob was an avid golfer and fan of all sports, especially his Wolverines and the Lie-downs (Lions). He followed all the Detroit teams and spent many a day watching them live across the country and on his living room couch. “Are you serious? Come on!” was often yelled at the TV when he disagreed with a call by an official. At all his kids’ games, he was the official-unofficial line keeper, member of the chain gang and their biggest fan.

Most important to Bob was his unwavering and devout faith in God. He was baptized in 2003 at Immaculate Conception Parish in Lapeer. Bob took his new found faith and ran with it. He studied it, read the Bible and prayed with his family daily. He frequented the sacraments often, even up to his death. A long-time member at Holy Family Parish in Memphis, he did not keep his lamp under a bushel basket but he set it high on a lamp stand and it gave light to all in his house (Matthew 5:15). He was a good and honorable son, brother, uncle, godparent, friend, spouse and father. He will be deeply missed by all who knew and loved him. Eternal rest grant unto them, O Lord, and let perpetual light shine upon them.

He was preceded in death by his father, Max; his sister, Linda Dean; and his brother-in-law, Peter Pytleski.

There will be a visitation from 10-11 a.m. on Wednesday, December 22, 2021 at Holy Family Parish in Memphis, followed by the Holy Sacrifice of the Mass at 11 a.m. Burial will follow at West Berlin Cemetery in Allenton. https://www.gofundme.com/f/57-for-ub  “Remember no man is a failure who has friends.”