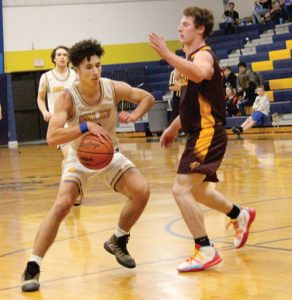 Holden Redd, of Imlay City, protects the ball from a foe in Saturday’s title clash.

With the outcome, Imlay City raises their mark to 2-1 overall.

In Saturday’s encounter, Imlay City grabbed a 9-7 edge after one quarter was complete.

Quarter two saw Imlay City generate 25 points and Deckerville net 19, giving them a 34-26 lead at the half.

When play resumed, Deckerville bounced back with a 17-15 third quarter edge. That trimmed their deficit to 49-43 with 24 minutes gone.

Imlay City then outscored Deckerville 18-9 the rest of the way, finishing off a 67-52 win.