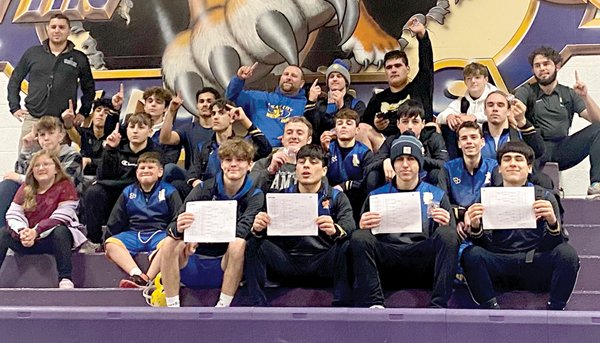 Conner Wildie (135) and Austin Herrera (145) provided Imlay City with fourths that day. Wildie wrapped things up when he was pinned by Brown City’s Easton Jager with 1:35 gone and Herrera concluded his run when he dropped a 20-6 verdict to Pinconning’s Darrius Cooper.

Travis Dupont (130) rounded out the list of Imlay City placewinners with an eighth. Dupont wrapped up action when he pinned Caro’s Connor Gilds with 17 seconds elapsed.

Derek Mason paced Capac with a first. He accomplished the feat with a 5-1 championship bout win against Cass City’s Cameron Gottschalk at 145 pounds.

Tyler McKenney, a 103-pounder, gave Capac a second in his weight class. McKenney closed out his stint on the mats with a 7-0 title match loss to Chesaning’s Quintin Everett.

Hunter Tyson provided Capac with a third. Tyson ended the day with a 7-5 victory over Caro’s Blake Sizemore at 171 pounds.

John Schoen (152) and Jesus Guerrero (215) added eighths to Capac’s cause. The former notched his finish with an 8-3 triumph against Chesaning’s Grant Sampson and the latter equaled his placing with a 3-2 win over Cass City’s Eric Kester.