TRI-CITY AREA — “Sometimes there are no words.”

No words to express the unfathomable grief shared by the parents and families of Oxford High School students whose lives were ended or permanently altered in a matter of minutes on the afternoon of Nov. 30 when a 15-year-old student allegedly shot and killed four teens and injured seven others.

The fact this particularly occurred in a nearby community made it all the more shocking for Tri-City area residents and school officials.

Almont Schools Supt. Dr. William Kalmar said he struggled to find the appropriate words to convey his personal anguish in a statement to students and parents Wednesday morning. 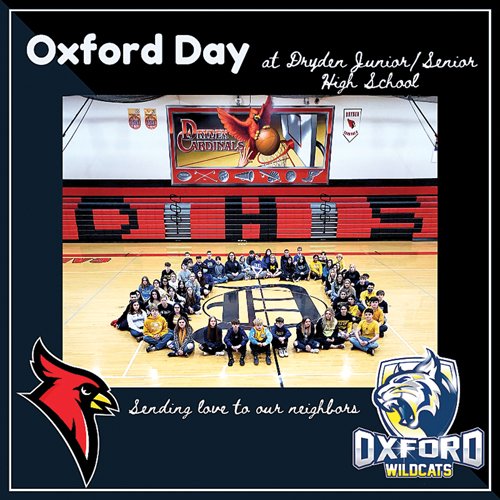 Dryden Jr./Sr. High School students dressed in Oxford’s school colors on December 1 and observed a moment of silence in honor of victims of the Nov. 30 incident.

“It’s really hard to know what to say anymore,” Kalmar admitted. “There is nothing I can say which can wholly alleviate the concerns all parents, including me, when confronted with episodes of violence in our schools.

“Other than taking more practical steps to make schools safer, there is no simple remedy for providing a safe and secure school environment.”

Kalmar said it was just two years ago in 2019 that Almont Schools engaged the services of a school security expert to help overhaul the school district’s emergency procedures. Additionally, the district has its own full-time school resource officer.

“We employ Almont Police Officer Amanda Manning whose sole responsibility is to be on campus with our students,” Kalmar said.

He added that Almont school buildings are physically secured, and that state-of-the-art security cameras were recently installed district-wide

“Ultimately,” Kalmar said, “our best defense against violence is the support of our families, along with the willingness of our students to speak to an adult when they see or hear anything concerning or suspicious.”

To that point, Imlay City Schools Supt. Dr. Stu Cameron talked about the important roles students and parents can play in recognizing when a student’s behavior is of concern.

“We encourage parents to pay close attention to their child’s emotional state,” he said. “We also encourage students to report any threats, behaviors or actions that cause them to be concerned about their own safety, or that of others.”

Fortunately, Cameron said that the recent passage of a major school bond proposal afforded the district to make upgrades to school security systems.

“Our district maintains a full emergency/crisis response plan with guidance from the Michigan State Police and Critical Incident Management,” Cameron said. “We also have our school police liaison officer on campus every day.”

He added that Imlay City students may participate in the OK2SAY program, which allows them to report any threats or criminal activities in strict confidence.

Students at Dryden Jr./Sr. High School responded quickly to acknowledge Oxford students and parents and others most affected by the tragedy.

On Wednesday, December 1, Dryden students dressed in blue and gold colors (in honor of Oxford) to observed a five-minute “moment of silence” for the victims from 12:55-1 p.m., the time it took for the shooter to kill four students and wound several others before being taken into custody.

Dryden school officials posted the following message on their Facebook page on Wednesday.

“Our Dryden community prays for and grieves with our Oxford neighbors today,” they said. “We are proud of our caring students for initiating this (moment of silence) idea.”

Howell, whose son John Howell is a teacher at Oxford High School, said there is an urgent need to take immediate action in the wake of the most recent tragedy.

“The perpetrator still had bullets in his magazine,” Howell noted. “Had that school resource officer not been there to disarm and neutralize (the shooter), God only knows how many more might have died.

“I want every student in Michigan to have that same level of protection.”