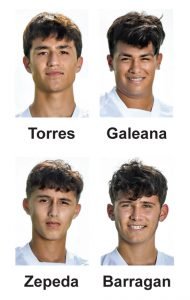 Giovani Torres, a junior midfielder, earned a spot on the second team.

Sergio Galiana, a junior forward, was a third team pick.

Edson Zepeda and Luis Barragan, both junior defenders, were named to the honorable mention portion of the team.

With their help, Imlay City won a Blue Water Area Conference title, a district championship and reached the regional semifinals before seeing their season wind down.

They are joined on the squad by: