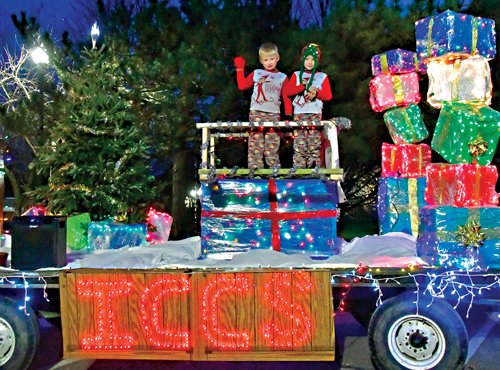 Imlay City Christian School students wave from their gift-bedecked float in the 2019 Winter Playground parade. The fun and festivities return this Saturday, Dec. 11.

IMLAY CITY — The Imlay City Downtown Development Authority (DDA) and Chamber of Commerce are teaming up to present this year’s Winter Playground on Saturday, Dec. 11.

The 2021 Winter Playground will run from 5-8 p.m. downtown, with the annual Christmas parade set to kick off at 6 p.m.

At the conclusion of the parade, all are invited to Lamb-Steele Park, where Santa will preside over a tree-lighting ceremony, sponsored by the DDA.

After the tree-lighting, children and parents will gather at the Halabicky Insurance offices at 335 E. Third St., where Santa will listen to children’s Christmas wishes and pose for photographs.

In addition to the parade and tree-lighting, the Chamber and DDA are presenting other Winter Playground activities.

For those wishing to be in the Lighted parade, Imlay City Chamber Director Shannon Hamel is still accepting applications.

“We want to encourage people to be part of the fun,” Hamel said. “That includes kids who put lights on their bikes and ride along.”

Parade applications are available at the Chamber office at 335 E. Third St.

For further information about the Winter Playground, lighted parade or related activities, contact DDA Director Lorrelei Natke at the city hall at 810-724-2135; or Chamber Director Shannon Hamel at 810-542-3256.

On Saturday, Dec. 11, the Imlay City Museum, located at the foot of Main Street, will be open from 1-4 p.m., in conjunction with this year’s holiday events.

Items available for purchase include the museum’s Limited Edition Keepsake Ornament of the Old Town Hall; historic postcards and copies of Marilyn Swihart’s best-selling book So Many Stories to Tell: A Glimpse Into Imlay City’s Past, which have been sold in many instances as a gift. Swihart will be available to sign copies of the book.