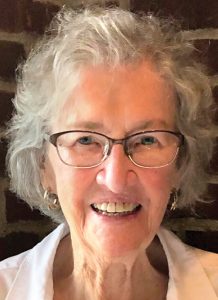 Florence Mroz, Jean to her family and friends, was a trail blazer.

She was a daughter, sister, wife, mother, aunt and friend; all roles she took on with pride and love. Jean was ahead of her time and was an entrepreneur, business woman, world traveler, a real estate investor and novelist.

Jean was born in Detroit on July 3, 1933, the fifth of eight children, to Carl and Veronica Benner. She grew up in the Depression era and the family moved to a farm in the Attica, MI area. On the farm she saw her Mom become an entrepreneur with a hatchery store and a fabric store. Jean also learned how to cook and sew from her mom.

After graduating from high school in Imlay City, Jean moved to Oak Park, MI and lived with her oldest sibling, Helen and her husband Richard Hunt. Jean loved being with her family and friends. She applied for and got a job with Michigan Bell first as a switchboard operator and later a clerk in the engineering department. While at work she met Gilbert “Gil” Mroz, an engineer and graduate of Michigan Tech University. Gil and Jean’s first date was to a Detroit Red Wings game. Jean had never been to a Wings game but she knew all of the player’s names on the team and they had a great time.

Jean and Gil were married and their first home was in Oak Park, MI. Gil was transferred to New York and they lived in Edison, NJ. They moved back to Michigan and raised five children, Daniel, John (Lynn), Debra (David Bonadeo), Karen (Ron Urman), and Judy (Robert Ziola). Jean found a large home for their growing family in Rochester, MI. Every year, the family took a two week vacation together, first in Florida and then annual trips to Arizona. They fell in love with Arizona, especially the Phoenix area. Later in life they would become snow birds with a home in Michigan and one in Arizona.

In the mid-1970s, Jean decided she wanted to open her own fabric store and did so in Oxford, MI. She enjoyed the camaraderie with her customers. When her youngest child, Judy, was in middle school and Jean was in her 40s, she decided to go to college. She attended nearby Oakland University and graduated with a Bachelor of Business Administration degree. She began as a book-keeper and then became an accountant.

Jean and her husband were very active in their church, St. Irenaeus, and enjoyed many social activities with a large group of couples. They had dinner parties in their homes and also took trips together. Jean loved traveling all over the United States as well as internationally. Hawaii was one of their favorite spots and they enjoyed cruises through Nordic countries, the Mediterranean, the Panama Canal and Hungary. Every year provided an opportunity for a new adventure and Jean was enthusiastic about each trip.

As time went on, Jean and Gil became grandparents to nine children (Michael, Jessica, Caitlin, Elizabeth, Grant, Matthew, Bradley, Alyssa and Bailey) and great-grandparents to five children. Family was very important to Jean and she ensured that she kept her family close by visiting often, planning family reunions, as well as stopping to visit family along their trips. Jean shared her love of traveling, cooking and music with her children and grandchildren. She loved listening to classical, contemporary and Christmas music.

In retirement, Jean and Gil began to buy, renovate and sell homes in Michigan and in Arizona. They loved doing the work which included construction as well as choosing paint, flooring, cabinetry, fixtures and more on each of their homes. Their goal was to make a home better than they found it so the next person would enjoy a beautiful place to live. They continued to fix and flip homes into their mid-80s.

In her 70s, Jean decided she wanted to express herself through novels. With little training, she began writing romance novels. Some of her books were based on her own experiences growing up in Michigan as well as a story about her father’s mother who came to the United States as an indentured servant. Her books were published and sold on sites such as Amazon. She recently started working on her seventh book. Jean was a loving and devoted wife to Gil and they truly had a long lasting love. They celebrated their 65th wedding anniversary recently and are an example to their children and grandchildren on a successful marriage. Jean’s impact on her children, extended family and friends was loving and everlasting. Jean was a terrific role model with a charismatic personality. She was friendly and generous. Jean loved laughing, having a great conversation and a glass of white wine. Jean had a way to make you feel that you were the most special person in the room. She will be missed by all. Cheers to you Jean – Egeszsegedre!

Masks are strongly encouraged but not required. At this time the Lapeer County Health Department strongly recommends that masks be worn inside by all people, regardless of vaccination status.

Please sign our on-line register book at muirbrothersfh.com to share your memories and condolences with the Mroz family.

Those wishing to make memorial contributions may direct them to the American Heart Association.­