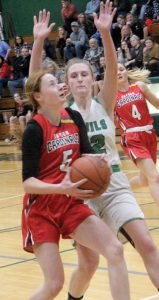 With the outcome, Brown City raises their mark to 2-0 overall. Dryden slips to 0-1 this season.

In Friday’s meeting, Brown City jumped out to a 15-9 advantage after one quarter had ended.

The next quarter saw Brown City collect two points as did Dryden, leaving the former up 17-11 at the halftime break.

When the action resumed, Brown City struck with a 13-4 third quarter edge. That increased their cushion to 30-15 with 24 minutes gone.

Brown City then outscored Dryden 9-5 from that point on, assuring themselves of a favorable 39-20 outcome at night’s end.