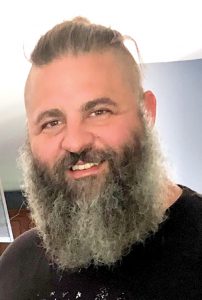 Daniel served in the Marine Corps from July 1999 until he was honorable discharged in December 2001. He married Krystal Corrina Bogan on May 13, 2014 in an intimate ceremony in St. Lucia.

He was employed by Cyprium Induction in Shelby Township as a coil induction machinist – supervisor. He had worked in the coil machinist industry for 20 years along side his dad. Dan was very good at everything he did and took pride in home renovations and fixing anything that was put in front of him.

Dan had lived in Eastpointe before he and Krystal moved to the Imlay City area six years ago.

Dan dearly loved his dogs, Kimber, Moose, Barrett and the late Tank. He also loved taking care of his cats and chickens. Dan thoroughly enjoyed hunting, shooting, gunsmithing and working around the house. He was a Michigan state record holder for powerlifting and loved competing in Strongman competitions. He also adored and loved spending time with his nieces and nephews, tinkering with his tractors and trucks and his 1979 K5 Blazer. Dan found most enjoyment with spending time with his wife, he loved her dearly and loved to spend most of his time off with her working around the homestead and building a dream home together.

Daniel is survived by his wife, Krystal Maki of Imlay City; his parents, Kasti and Sandra Maki of Clinton Twp., MI; his brother, Stephen (Molly) Maki of South Lyon, MI; his grandma, Marie Micu; his parents-in-law, David and Catherine Bogan of East China, MI; his sister-in-law Kalicia Potrykus; his nephew, Ivan and niece, Arya Maki; and his niece, Lyla and nephew, Landon Potrykus.

Daniel is proceeded in death by grandparents, Annalee and Gus Maki; and grandfather, Dumitru Micu.

On Saturday, December 11, 2021 family and friends will gather to celebrate Daniel’s life beginning at 10 a.m., Celebration of Life at 12 p.m. and memorial luncheon will follow – all at Muir Funeral Home & Celebration of Life Center, 2650 South Van Dyke, Imlay City, MI 48444.

Share a story or photos on Daniel’s Memory Page at www.muirfh.com