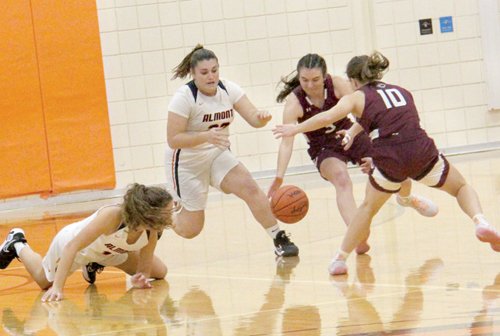 Almont’s Sarah Hall (middle) battles a pair of Cass City foes for the ball during a game this past week at home. Cass City won the contest 47-28.

In Tuesday’s encounter, Cass City bolted out to 15-6 advantage after one quarter was over with.

When play resumed, Almont bounced back with a 10-9 third quarter edge. That trimmed their deficit to 32-23 at the time.

Cass City then outscored Almont 15-5 the rest of the way, putting the finishing touches on a 47-28 win.

For Cass City, Saylar Cuthrell led the way with 15 points. Cuthrell drained a triple along the way.

Grace Johnson (nine points, including a pair of trifectas) and Grace Koenig (nine, featuring a trey) paced Almont. They were backed by Kendall Roszczewski (four points) along with Sarah Hall, Brandi Zimmer and Autumn Bletch (two each).

Almont also received one assist apiece from Johnson and Roszczewski.