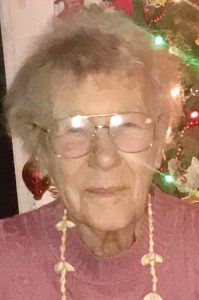 They lived in Brown City, MI, and Madisonville, TN, where they raised dairy cattle and grew vegetables. She enjoyed reading, knitting and crocheting. After John’s death she moved back to Michigan, to be closer to family and friends.

She was preceded in death by her sister, Cinthia Gibson.

At this time no services are scheduled.