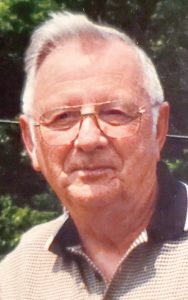 Earl R. Crowel, 93, lifelong resident of Almont, passed away Monday, November 22, 2021 at McLaren Lapeer Region Hospital. He was born in Almont on October 18, 1928, the son of Robert and Linnie (Cook) Crowel. He graduated from Almont High School in 1947 and in 2017 was inducted into the Almont Athletic Hall of Fame in both football and basketball. He served in the U.S. Army for two years, including a tour in Germany, until receiving an honorable discharge as a Corporal. Earl married Virginia Owen on July 25, 1953. He was the co-owner of Crowel Trucking in Almont, which was founded by his father in 1932. In later years he enjoyed traveling the country delivering buses for Champion Bus. He loved his coffee time with friends and “solving” the world’s problems. Earl and his wife Ginny enjoyed several cruises and trips to Northern Michigan and Europe. An all-around sportsman, Earl loved hunting, fishing, swimming, euchre, watching college football and spending time with his family.

He is survived by his children, Viki (Louie) Campbell of Almont and Randy Crowel of Almont; grandchildren, Joe Crowel of Murfreesboro, TN, Merlin (Angela) Crowel of Clinton Twp. and Caitlyn Crowel of Detroit; great-grandchildren, Olivia Grace Crowel and Vincent Crowel; and many nieces and nephews. In addition, he leaves many close family members, Carol (Roger) Jackson, Sue (Mandernach) Edmonds, Shelly Campbell, Stephanie (Jim) Jarrait, Angie Campbell and Karee (Brian) Moore. Earl will be missed by many who enjoyed his smile and sense of humor.

He will lie in state on Wednesday, December 1, from 10-11 a.m. with funeral service at 11 at West Berlin United Methodist Church.

Funeral arrangements were made by Muir Brothers Funeral Home in Almont.

In lieu of flowers, the family requests memorials to Wounded Warriors or West Berlin United Methodist