Officers to get 2.5 percent wage increase plus incentives 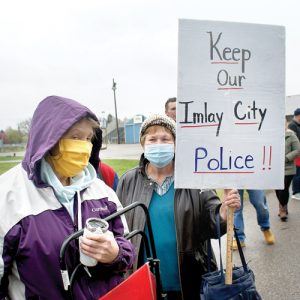 Earlier this year when city officials considered disbanding the police department, community members spoke out against such a move at a forum held in April at the fairgrounds.

The police department’s POAM union voted to accept the terms of the agreement on Nov. 11.

The police department had been operating under the terms of a previous contract that expired on June 30, 2021.

Horton said the new pact includes a 2.5% wage increase for police officers, along with incentives during the second year designed to attract new officers and to encourage current officers to stay in Imlay City.

He added that minor changes made to the former contract will allow the department to be more efficient and manageable.

“We can compete head-to-head with Oakland (County) and Macomb (County) departments, while working to have the best police department we can.”

Disbandment had been considered

Passage of the new police contract follows months of uncertainty about the future of the city’s police department.

In April, city commissioners had broached the idea of disbanding the Imlay City Police Department in favor of contracting with the Lapeer County Sheriff’s Department for police coverage with the potential to see cost savings with such an arrangement.

The suggestion to dissolve the hometown department raised the ire of the majority of city residents, whose opposing voices were heard loudly and clearly during a community forum held inside the Walker Barn at the Eastern Michigan State Fairgrounds on April 29.

On May 4, commissioners voted unanimously to no longer pursue a contract with the Sheriff’s Department, and instead to hire a new full-time police chief to succeed Scott Pike, who had already tendered his resignation.

•Commissioners approved a 60-month contract with Ricoh for office printers and copiers for use by city employees at a cost of $407 per month.

•Representatives from King and King will be present at the commission’s Dec. 7 meeting to discuss and answer questions regarding the city’s audit for 2020-2021 fiscal year.