New districts in effect for 2022 election

TRI-CITY AREA — Change is in store for the Lapeer County Commission. A new map, adopted by the apportionment commission earlier this year, has resulted in all seven districts getting a different look when new terms take effect January 1, 2023.

Unless a sitting board member chooses to move, there will be at least one new county commissioner after next year’s election. That’s because no one on the board currently resides in the new District 5—Imlay City, Arcadia and Imlay townships and the eastern half of Attica Township.

After studying new population numbers made possible by the 2020 Census, the apportionment commission opted to move Arcadia Township from the current District 2 and align it with some of their neighbors to the south and east. All of Attica Township is currently in District 6 and Imlay Township and Imlay City are in District 7 so the new District 5 is completely new in terms of it’s makeup. In its current state, District 5 encompasses the southwest corner of Lapeer County. 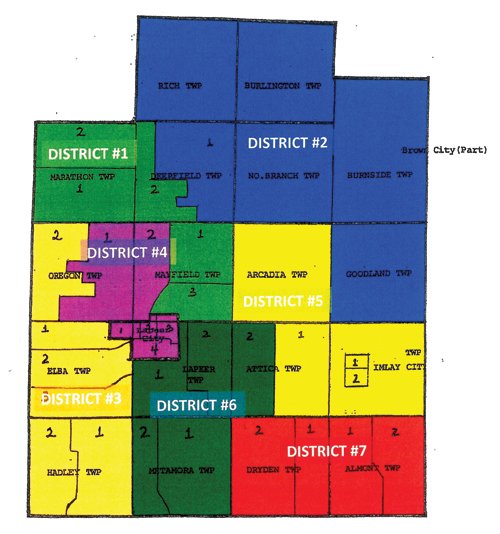 The new county commission map for Lapeer County is due to take effect in 2023. As a result of redistricting, many voters in the Tri-City area will find themselves in new districts.

Currently, Gary Roy represents Goodland Township and points north in District 2. The redistricting process has removed Arcadia Township from its boundaries and added Rich and part of Deerfield Township starting in 2023. It’s the biggest district in terms of size.

The commission is comprised entirely of Republicans.

She notes that per state law each county’s apportionment commission consists of the the county’s clerk, treasurer, prosecutor and the chairpersons of Democratic and Republican parties. Since the official U.S. Census data was made available for their review in September, the commission has met several times, she added.

Although the changes won’t take effect for more than a year, the new boundaries will apply to commission candidates seeking office in 2022 elections.

In St. Clair County, there are no proposed changes to those districts that include the Tri-City area. Maps created in October by the clerk’s office show that District One will continue to encompass the village of Capac and Mussey and Lynn townships. It’s currently represented by Greg McConnell. District Six is also proposed to remain unchanged. It includes Berlin Township and is represented by David Rushing.

After adoption the plans will be submitted to the State of Michigan.