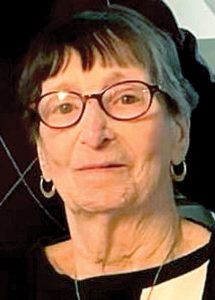 Gladys Robinson, 86, of Almont, passed away Friday, November 12, 2021 at McLaren Lapeer Region Hospital. She was born August 9, 1935 in Droylsden, England, one of eight children of Alexander and Gladys (Simpson) Sinclair. Gladys married her beloved husband, Dennis Robinson, March 3, 1956 at St. Mary’s Church in Droylsden England. Together they moved to the United States in 1962. She was a member of the First Baptist Church in Almont and was an avid soccer mom. She enjoyed ballroom dancing and collecting old English teapots.

She is survived by two sons, Howard (Kim) Robinson of Warren and Paul Robinson of Almont; grandchildren, Wendy, Guy, James, Colin and Kayla; and six great-grandchildren. Also surviving are three sisters, Dorothy Smith of Australia, Marion Heap of England and Mavis Radclife of England; and many nieces and nephews. She was preceded in death by her parents; her husband, Dennis; two brothers, Alex Sinclair and Malcolm Sinclair; and two sisters, Norma and Margret.

To sign the online guest book or leave a memory please visit MuirBrothers.com.